You are here: Home1 / book2 / Bride Behind The Desert Veil

The stranger at the altar…
Is the woman he was meant to forget!

Sharif Marchetti is deliberate. Controlled. Especially in his strategic choice of a royal bride. So after surrendering to his instincts with a mystery woman, he must erase their desert encounter from his memory. Until they meet a second time…moments before they exchange wedding vows!

Princess Aaliyah Mansour is stunned that her arranged marriage is with the man who’d stirred her soul. She was prepared for a union that left her independence and defences intact. Not a jet-set lifestyle with a husband who’s the ultimate distraction… 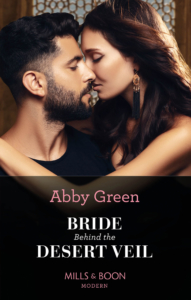 ONLY 99p ON AMAZON UK KINDLE DEAL FOR AUGUST! 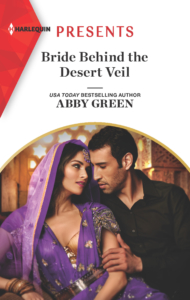 Sharif saw the falcon first. A peregrine falcon. Mature. He guessed at least ten years old. Magnificent. Feathers reflecting golden tints in the dying rays of the sun. Its grace and seemingly lazy circles in the air didn’t fool Sharif. It was looking for prey and would swoop and kill within a split – second.

He was about to find his binoculars to have a closer look when he heard the sound of horses hooves. One horse.

He shrank back into the shadows of the trees around the natural pool at the oasis where he’d set up camp for the night, en route to the palace at Taraq. His team had gone on ahead. He’d needed some time alone in the desert. It never failed to ground and recharge him and the coming weeks would require all of his focus…

A horse and rider thundered into the small but lush oasis, shattering the peace. In an instant Sharif assessed the young man to be an expert horseman, his body moving as one with the horse. The enormous stallion came to an abrupt halt under a twitch of the reins, nostrils flaring, body sheened with a light film of sweat. He’d been ridden hard.

The young man slid off athletically, patting the horse’s neck and leading it over to the pool where it drank thirstily. He looped the reins around a nearby tree, tethering the horse.

Sharif wasn’t sure why he stayed hidden in the shadows, some instinct compelling him to remain hidden for now. He sensed the stranger’s desire to be alone? Like him? Also, maybe he presumed the rider would move on once the horse had drunk and rested for a moment.

He couldn’t make out the man’s, boy’s face. He had to be a boy. He was tall, but too slight to be a man. Head and face covered in a loose turban.

The falcon swooped low at that moment and Sharif saw the rider lift up his right arm where the bird came to rest on a leather arm – guard. So, it was a pet falcon. Impressive.

The stranger fed the bird what looked like a piece of meat out of a pouch at his hip and then with a flick of his arm, the bird flew off again.

But then, the young man stood again at the edge of the pool. A sigh seemed to go through his slender frame. And then he lifted his hands to undo his turban.

Sharif moved to announce himself, but stopped again in his tracks when the turban fell away and a riotous mass of dark unruly curls was unleashed, tumbling down a narrow back. Narrow back. Long hair. Curls. It hit Sharif. This wasn’t a young man, it was a young woman and as he watched, struck mute and unable to move, she started to take off all of her clothes.

The Innocent Behind The Scandal

The Flaw in his Red-Hot Revenge
Scroll to top