You are here: Home1 / book2 / A Christmas Bride For The King

Reluctant ruler Sheikh Salim Al-Noury would rather abdicate than taint his realm with his dark secrets. Until one exquisitely beautiful diplomat is hired to persuade him to reconsider the throne…

Christmas means heartbreak to Charlotte MacQuillan, so working abroad over the festive season is the perfect getaway. But Salim proves to be her most challenging client yet as his rugged masculinity awakens untouched Charlotte to unimaginable pleasures!

Soon Salim accepts that he alone can bear the weight of the crown. And his first proclamation will be to make Charlotte his Christmas queen! 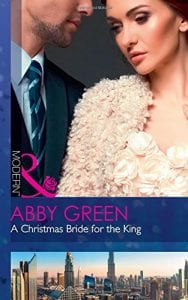 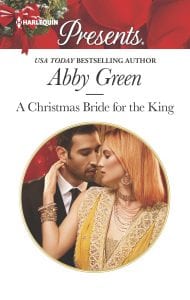 Charlotte MacQuillan paced back and forth in the empty office and looked at her watch for the umpteenth time. She couldn’t believe she’d actually agreed to come to this land – locked Arabian country to advise its recalcitrant King – in – waiting on diplomacy. And speaking of waiting, he’d kept her waiting for an hour now.

But, she might have expected as much from the enfant terrible of the international billionaire playboy scene.

Charlotte had known of Sheikh Salim Ibn Hafiz Al-Noury’s debauched reputation but only in a peripheral sense. She didn’t indulge in salacious celebrity gossip magazines but she figured the only place they hadn’t heard of the playboy Sheikh with his outrageous good looks, virile masculinity and jaw – dropping wealth was in a remote undiscovered corner of the Amazon rainforest. And even there they probably had posters of him tacked to trees.

Charlotte walked over to a nearby window that looked out over a seemingly unending sea of sand, under a painfully blue sky. The sun was a blazing orb and she shivered lightly in the air – conditioning, imagining how merciless that heat must be with no shade. The little taste of it she’d had walking from the plane to the Sheikh’s chauffeur driven car, and then into the palace had almost felled her.

With her fair, strawberry blonde colouring, Charlotte had never really been a sun – worshipper. So why on earth had she agreed to take on this assignment then?

An image inserted itself into her mind in answer: London as she’d just left it – in the full throes of Christmas countdown with glittery lights twinkling and all the forced festive bonhomie that never failed to set Charlotte’s teeth on edge for at least a month every year.

To say that she loathed Christmas was an understatement. And yet as she looked out over this alien view that couldn’t be more removed from that London scene, she didn’t feel relieved. She felt a pang. Worse. A yearning.

It was that tiny traitorous part of her that secretly ached for the kind of Christmas celebrated in cheesy movies and on cards depicting happy families and togetherness. The fact that she usually spent her Christmas day alone with tears coursing down her face as she watched ‘Miracle On 34th Street’, or ‘It’s a Wonderful Life’ was a shameful secret she would take to her grave.

She made a disgusted sound at herself and turned her back on the view, firmly shoving any such rogue yearnings down deep where they belonged. Instead she distracted herself by taking in the vast expanse of the Sheikh’s Royal office, which, if the correct protocol was being observed, she should never have been allowed into without his presence. She sighed.

She could see that at one time it had been impressive with its huge floor to ceiling murals depicting scenes that looked as if they’d been plucked from a book of Arabian mythology. But now they were badly faded.

Everything about Tabat and its eponymous capital city that Charlotte had seen so far had an air of faded glory and neglect. She’d downloaded information on the country from the internet before leaving England and had used the plane journey to acquaint herself with the basics.

The last King of Tabat, Sheikh Salim’s grandfather, had brokered a marriage between his only child – a daughter – and the Crown Prince of their neighbouring Kingdom, Jandor, in a bid to bring peace to the warring region. It had worked. Since the marriage, the two nations had coexisted in relative peace with the understanding that the heirs of the union would become the respective rulers of Jandor and Tabat, thereby ensuring a long – lasting peace into the future.

And everything had gone to plan – the Queen of Jandor had dutifully given birth to two sons – Charlotte frowned now as she recalled mention of a daughter but she’d read nothing more about her in the potted history – and on the death of the King of Jandor just over a year previously, the eldest son Zafir had inherited the Kingdom of Jandor, and Salim had inherited the crown of Tabat.

And in spite of its air of neglect, Tabat was no shabby inheritance. The city had charmed her with its ancient winding streets, clusters of stone buildings and the river that ran all the way from the Tabat mountains to the sea on the coast of Jandor.

The country was rich in natural energy – oil being the most important and lucrative resource. But its infrastructure was in serious need of modernisation along with myriad other aspects of the country – education, government, economy etc. It badly needed a leader prepared to take on the mammoth task of hauling this country into the twenty – first century. The potential was abundant and just waiting to be tapped into.

But from the little she knew of Sheikh Salim and his reputation, she didn’t hold out much hope for that happening any time soon. She’d been hired by his brother, King Zafir, to help advise Sheikh Al-Noury on international diplomacy and relations in the run up to his coronation, but in the two weeks since she’d accepted the assignment, neither the Sheikh nor his people had made any effort to return Charlotte’s calls or provide her with any information.

She’d just finished working with King Alix Saint Croix who had famously been in exile for many years after a coup in his island principality, and her experience with the urbane intelligent King and his stunning wife, Leila, had been an absolute pleasure for Charlote.

She had a feeling this job was going to be nothing at all like her time on Isle Saint Croix working for a King who hadn’t really needed her expertise, but who had graciously asked for her opinion in order to ensure his transition back onto the world stage was as smooth as possible.

Charlotte checked her watch again, the Sheikh was now well over an hour late. Feeling frustrated and not a little irritated and tired after her journey, she walked over to where she’d put down her document case, prepared to leave and find someone who could direct her to her room. But just as she drew near to the huge doors, they swung open abruptly in her face and a man walked in.

One thing was immediately and glaringly apparent. In spite of seeing his picture online, Charlotte was not remotely prepared for Sheikh Salim Ibn Hafiz Al-Noury in the flesh. For the first time in her life she was rendered speechless.

For a start he was taller than she expected. Much taller. Well over six feet. And his body matched that height with broad shoulders and a wide chest narrowing down to lean hips and long legs. He was a big man and she hadn’t expected him to be so physically formidable. Her impression was one of sheer force and power.

Messily tousled over – long dark hair framed his exquisitely handsome face which was liberally stubbled. His eyes were so blue they immediately reminded Charlotte of the vast sky outside, vivid and sharp. His mouth was disconcertingly sensual – a contrast to the hard angles of his body and bone structure.

He was wearing a loose white v – necked chemise that revealed the solid mass of muscle on his chest and a tantalising glimpse of dark hair. It was tucked into very worn jodhpurs that clung to hard and well – muscled thighs in a way that could only be described as provocative. Scuffed and worn leather boots hugged his calves.

And it was only then, belatedly, that Charlotte registered the very earthy and surprisingly sensual smell of horse – flesh, and something else – male sweat. To her utter horror she realised that she was reacting to him as if she’d taken complete leave of her senses.

A Diamond For The Sheikh’s Mistress

The Virgin’s Debt To Pay
Scroll to top