Some guys know just what a girl needs…

Fresh off a brutal break-up—with a guy who was running for the World’s Biggest Liar—Ashling Sullivan has returned to New York City to start over. Priority number one is getting her new business started with her BFF, Jenna. Hence their strict no-guys pact. No dating, no sex, no exceptions! Until temptation walks into her brother’s bar in the form of a really, really hot guy!

She must resist. She will resist. Except that Johnny Ryan, with his cool, edgy but brooding attitude (what is it with this guy?) and his so, so strong carpenter’s hands, is six-foot-three inches of ripped, Irish sexiness that turns Ash into a puddle of lust in about half a second. Worse yet, he offers her a deal that she can’t refuse?a down-‘n’-dirty and wickedly hot two-week fling. Just one last ride before she gets down to business. No-one would know! Ash is definitely not thinking with her head or her heart when she agrees…

Because this thing with Johnny goes way deeper than just chemistry. And what started as a last, wild ride with a bad boy is definitely headed for major head-on collision… 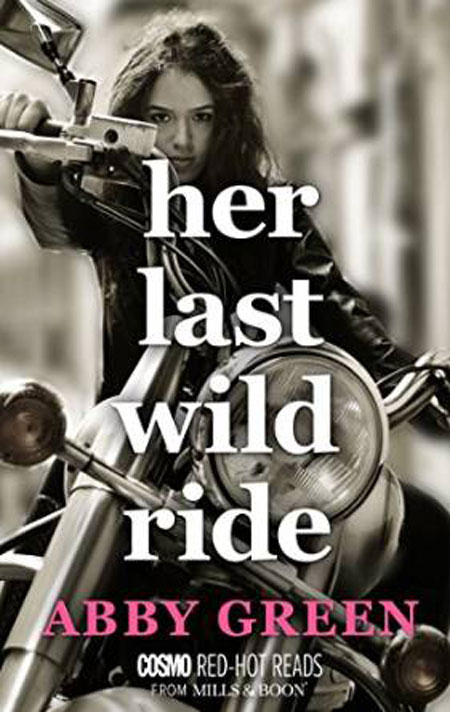 Johnny Ryan curbed the urge to snarl at the girl who seemed intent on thrusting her oversize breasts into his mouth. It wasn’t her fault he was edgy as fuck tonight. How was she supposed to know he was sweating at the thought that any moment now he might see his baby sister for the first time in years?

Pneumatic breasts brushed his arm boldly again and he gritted his jaw. He’d tried ignoring her, but he was well used to the tenacious zeal of the single New Yorker woman by now, so he sighed and turned to her, saying, “Look, I just came in for a quiet drink, okay?”

For a second her heavily made-up eyes took on the glint of a challenge, but then she must have seen something on his face, because she finally admitted defeat and said, “Aw crap. Fine.” And then she swung off the stool to go back to her friends.

A shadow covered the memory. Fifteen had been before his world had been ripped apart for good. When he’d still had some sense that life was a pretty benign place and that nothing too bad would ever happen.

But it had. And he’d only just started coming out the other side again, nearly a decade later.

The cute bartender came into his line of vision and his conscience smarted because he’d been rude to her. Coming into this bar was loaded for him, and he was raw, but it wasn’t her fault.

What was it someone had called her? Ashling…Sullivan. So she had to be related to Liam Sullivan, the owner of the bar and his little sister’s boyfriend, according to the PI who had tracked Johnny down. The PI who’d been sent to look for him by Liam on Johnny’s sister’s behalf.

Luckily Johnny had been able to persuade the man to give him a chance to come and see Caitlin himself, before he passed on his whereabouts. Except neither Liam or Caitlin appeared to be here this evening. He wasn’t sure whether to be relieved or not, but something in him eased out of a tight grip. He was ill enough prepared to see his baby sister, never mind deal with the fact that she had a boyfriend.

He scowled at himself, as if he even had a right now to act like the possessive big brother. He’d given up that right when he’d left Dublin three years ago. Familiar guilt made Johnny’s hand clench around his beer. Guilt on top of guilt. Heaped in so many layers now, he’d never find his way out.

After his world had imploded with the death of his parents at the age of seventeen, he’d been plunged into the depths of grief and had created not a little havoc.

New York had become his hiding place for the past three years. A space for him to lick a lot of wounds and explore what he really wanted to do. And now with his baby sister on his doorstep, it was time to come out of hiding. But perhaps not today.

Now that he felt fairly certain he wouldn’t see Caitlin, he watched Ashling Sullivan work. It was no hardship; she was exquisitely pretty. Big blue eyes, slightly almond shaped. High cheekbones, a straight nose and a wide mouth with full, very kissable lips.

Desire pulsed through his blood, heating it up. When he’d caught her gaze earlier, it had been so blue it almost hurt. She lifted her hands now to tuck some stray dark blond hair into the messy bun on top of her head. The movement lifted smallish but firm-looking breasts, and a jolt of electricity and heat went straight to Johnny’s groin, surprising him with its force.

He grimaced and shifted on the stool. He’d had lovers since he’d come to New York. For the first year he was ashamed to admit that he’d lost himself a little in a spiral of booze and meaningless hookups. Anything to take the edge off the turmoil simmering in his system.

And then thanks to a job opportunity with a fellow ex – pat, he’d finally begun to climb out of his self-destructive streak and had gone the opposite way, giving up booze and women for almost a year, concentrating on his work.

Since then…he’d settled somewhere in the middle. He still wasn’t remotely interested in anything serious romantically. He’d left his own family behind for crap’s sake, so women were fleeting diversions to him. He didn’t need to be responsible for hurting anyone else.

But when a woman came along and she was happy to take what he could offer, then he took full advantage. It had been a while, though, since anyone had piqued his interest the way this woman was…

He watched her bend and twist to put glasses in a dishwasher. He wanted to know how long her hair would be if left down. Would it look wild? Like her? Because she looked wild, and knowing. As if she’d seen a little too much of the world, too. It was in the directness of that blue gaze.

She was relatively tall, about five foot seven. Slender with delicate curves, yet a surprisingly lush ass in tight black jeans. And those tantalizing breasts under a snug Sullivan’s Bar and Eatery V-neck T-shirt. He was already wondering what they’d be like naked—firm, and tip-tilted with small berrylike nipples? He had to shift again on the stool at that visual.

She turned away now to reach up and get a bottle of liquor from the shelf along the wall at the back of the bar, and Johnny’s gaze was riveted on the juncture between her legs where the shape of her ass was like an upside-down heart.

His mouth went dry and his dick strained against denim. Shite. All he could think about was cupping that ass and spreading his fingers along her cleft to see if she felt as hot as she looked. He imagined slick folds of flesh, wet with arousal, pushing against the gusset of her panties, slipping a finger inside, easing those plump lips apart, spreading her juices, then slipping two fingers—

It took him a second to realize that she was standing in front of him and looking at him with a raised brow. Clearly she’d just asked if he wanted another drink. Feeling seriously disorientated and turned on in a way that he couldn’t remember feeling in…ever, Johnny knew he had to get out fast. He shook his head abruptly, throwing down a couple of bills before getting off the stool and adjusting himself discreetly, so he wouldn’t make a complete ass of himself walking out of the bar. Damn her.

The last thing he needed was to be lusting after a relative of his sister’s boyfriend! He took the long walk home over the Brooklyn Bridge, keen to get some air to his overheated brain cells. He’d take a taxi on the other side. It was only when he’d reached his apartment that he realized he hadn’t even asked where Caitlin was.