Married For The Tycoon’s Empire

You are here: Home1 / book2 / Married For The Tycoon’s Empire

Ben Carter’s reputation has been savaged by a shocking press exposé and there’s only one way to save both it and his latest business venture: with a gold ring. In Julianna Ford—daughter of his European rival—Ben’s found the perfect candidate…until she says no.

No one refuses Ben Carter, not least of all this beautiful and beguiling English society princess. So when Julianna auctions one kiss for charity, Ben seizes the chance to win his heiress. He might have paid one million dollars for a kiss, but Ben intends to have so much more! 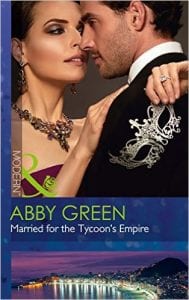 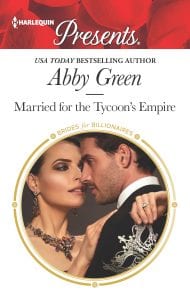 Married For The Tycoon’s Empire

‘Now, who is going to start the bidding for a kiss with our lovely English Rose, Julianna Ford?’ said the smooth voiced auctioneer behind a tall lectern.

Benjamin stood at the side of the room, with his arms folded and hands tucked under his arms. Because he was afraid he might reach out and physically throttle anyone who dared to attempt to kiss the woman on the dais, situated in the center of the vast room.

She looked far too enticing with her hair pulled back exposing her long neck, and also, strangely vulnerable. He would have thought that someone from her background and particular social scene would be accustomed to showing off in such a manner. She’d certainly shown an authoritative side when they’d met the previous evening.

And yet, he recalled her wide – eyed look of shock just after they’d collided yesterday. How colour had washed into her cheeks. Most women he knew would make the most of such an encounter but she’d appeared slightly awkward. Unsettled.

She wore an elaborate black lace mask over the top half of her face and it only enhanced her beauty, making her look mysterious. But even the mask couldn’t hide the brilliant blue of her eyes. Or that enticing mouth.

He could sense other men’s interest and a surge of something completely alien rushed up inside him and it took him a moment to recognise that it was possessiveness, because he’d never felt it before for a woman.

Mine, thrummed through Ben’s blood, just as a voice near the front shouted out, ‘Five thousand dollars!’

Something went tight inside Ben as the bidding started to escalate…ten thousand, fifteen…twenty. There were gasps now, people looking around. And then a booming voice called out, fifty thousand dollars!

Ben knew who it was immediately. An old foe of his, someone who had tried to stamp out Ben’s company before it had even got started. He saw the man pushing through the crowd now, small and squat, eyes bulging and perspiration beading on his brow.

He also saw, even from where he was, how Julianna’s eyes widened behind her mask as she took him in.

The auctioneer held his gavel up and asked if anyone wanted to contest this latest bid. No – one moved. The thought of that man getting anywhere near Julianna made Ben feel a level of violence he hadn’t experienced in a long time.

The auctioneer brought the gavel down once, twice…and just before he could bring it down again, Ben spoke authoritatively into the silence, ‘One million dollars.’

Everyone gasped and turned to look at him. He walked forward, the crowd parting to let him through. When he was near the dais, he stopped and said, ‘But I want more than a kiss. For a million dollars, I want a weekend with Julianna Ford.’

An Heir To Make A Marriage

Claimed For The De Carrillo Twins
Scroll to top