You are here: Home1 / book2 / Redeemed By His Stolen Bride

But is she the key to the Spaniard’s redemption?

Seeking vengeance, billionaire Gabriel isn’t above stealing his rival’s fiancée for himself! His plan seems complete when, to support her struggling mother, sweet, penniless Leonora agrees to his ruthless proposal. But at his luxury villa, he’s blindsided by their powerful attraction—and her innocence!

Gabriel only offers passion, but behind his arrogant pride, Leonora discovers his loyalty matches her own. She sees the honorable man Gabriel could be, if he’s prepared to give her more than just pleasure… 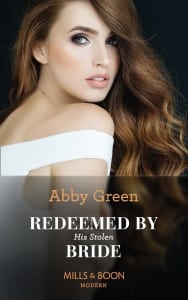 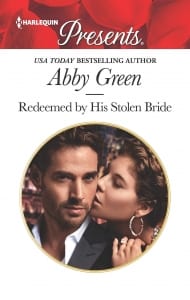 Leonora Flores del la Vega couldn’t seem to take her eyes off the man standing at the back of the crowd in the glittering ballroom. He towered over everyone around him putting him well over six feet.

He was also scowling which only made his hawkish good – looks even more forbidding and intimidating. And even from here, Leonora was aware of his sheer masculine magnetism. As if there was an invisible thread tugging her attention to him whether she liked it or not.

She knew who Gabriel Ortega Cruz y Torres was. Everyone did. He came from one of Spain’s most noble and oldest families. They owned huge swathes of the country and generated an income from banking, vineyards and real estate just to name a few enterprises.

He was an intensely private man but even so, he had a reputation for being as ruthless in the bedroom as he was in business. Single, he was considered one of the most eligible bachelors in Europe, if not the world. But he appeared to be in no hurry to settle down. And when he did? It would be to an undeniably well – connected woman who breathed the same rareified air as he did.

And why should that even concern her? Leonora chastised herself. She might come from a family almost as well – connected as Gabriel’s but there the similarity ended. They’d lost their fortune and had been subsisting on scraps and funds from opening up their Castillo just outside Madrid, to survive. An ignominious state of affairs. And one that was becoming increasingly unsustainable.

She had never spoken to Gabriel Torres and was never likely to. A man like him wouldn’t lower himself to consort with someone from a family of very faded glory.

But, she’d always been aware of him. From the moment she’d first laid eyes on him when he’d been about twenty – one and she’d been about twelve. She’d watched him play polo – this was before her family had lost everything due to her father’s gambling habit, a long – standing source of shame that had kept her parents from venturing out in public for years.

She hadn’t been able to take her eyes of Gabriel that day. He’d been so vital. So alive. He and the horse had moved as one, with awesome athleticism and grace. But it had been the expression on his face that had caught her – so intense and focused.

He’d said nothing, just glowered at the man. Leonora could remember an ache near her heart, as if she wanted to soothe him somehow…make him smile.

She became aware of the hubbub in the ballroom. The hundreds of eyes looking at her. And suddenly she came out of her reverie and back into the present moment. A moment that was going to change her life forever. A spurt of panic clutched at her gut and she breathed through it. She was doing this for her family. For Matías. She had no choice. She was their only hope of redemption.

A light sweat broke out on her palms as she forced her gaze away from the man at the back of the room and found the man she should be looking at. Her fiancé. Lazaro Sanchez. He was devilishly handsome with overlong dark blond hair and mesmerisingly unusual green eyes. Tall – he was almost as tall as – she shook her head briefly. No.

She had to stop thinking about him. She was about to become engaged to this man. This man who…she hardly knew, if she was honest. They’d had some dates. She didn’t feel anything when she looked at him. Not like…him.

But, Lazaro was kind and respectful. And more importantly, he was prepared to bail her family out of their quagmire of debts and in so doing, restore their respectability and secure Matías’s future. In return, Leonora was cynical enough to recognise ruthless ambition when she saw it. Lazaro Sanchez wanted to marry her to achieve a level of acceptance into this world she inhabited. Her only currency now was as a trophy to someone like this and she had no choice but to accept it.