Three Weeks in the Boss’s Bed!

Lucy Proctor watches the women who come and go in Aristotle Levakis’ life. She has no desire to join them, despite Ari’s devastating good-looks, and is perfectly content as his assistant – or so she tries to convince herself!

Ari shouldn’t find his prim and plump secretary attractive, but something about her calls to him. He knows there is only one way to overcome this desire – and that is to sate it… 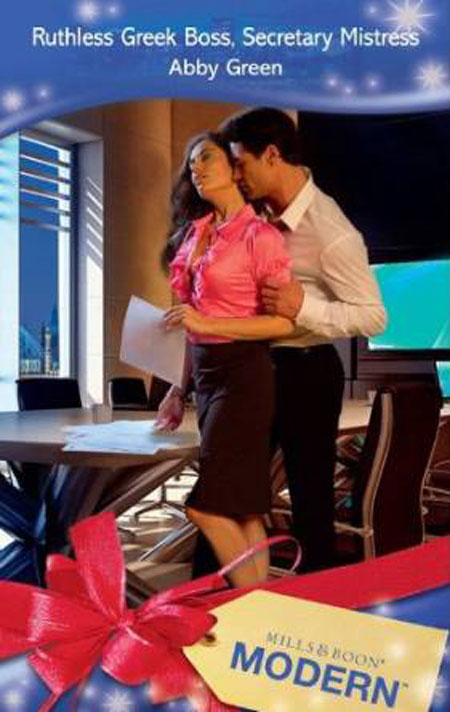 Also contained in the Anthology
Greek Affairs: In the Boss’s Arms
January 6, 2012 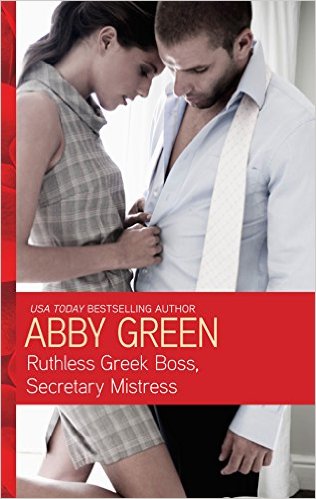 Lucy flushed even hotter, mortified heat drenching her in an upwards sweep but much to her utter humiliation, she knew it wasn’t all mortification, some of it was pure…thrill. This man was doing nothing short of creating a nuclear reaction within her, comprehensively threatening everything she’d protected herself against with for years.

She dropped her outstretched hand without even realising what she was doing and shook her head, finally taking a step back, pretending she wasn’t as affected as she was as if her life depended on it.

‘You mean the part where you mauled me? That wasn’t mutual attraction.’

Immediately he tensed and his eyes flashed dangerously. Lucy swallowed, she knew she’d just said the worst thing possible. Most bosses in this situation would sense the potential danger of having a sexual harassment suit landed against them and back off. But Aristotle Levakis was not most bosses and Lucy guessed belatedly that no woman, ever, had accused him of mauling them, and certainly her dreams over the weekend hadn’t been of someone mauling her, quite the opposite in fact.

Aristotle stood to his full height, power and pure sexual charisma bounced off him in affronted waves. He arched a brow, his arms were still folded tightly across his chest, the biceps of his arms bunching even through the material of his silk shirt.

Lucy swallowed again, her throat suddenly as dry as parchment. She nodded but now felt herself curling up inside with humiliation.

Aristotle came and stood very close, Lucy had to tip her head back and look up, she clenched her jaw. He was looking down at her with an expressionless face, those light green eyes glittering. Dark slashes of colour highlighted his cheekbones. He was livid, she recognised and a flutter of fear came low in her belly, along with another flutter of something much more dangerous.

He started to walk around her, Lucy held herself rigid.

From behind her she heard him say, ‘When I put my hands on your waist you didn’t stop me, or push me away.’

‘I –‘ she began but stopped, as the memory of his hands on her waist speared through her. How his fingers had dug into her soft flesh. How she’d wanted them to dig harder.

‘Then when I kissed you, you also didn’t pull away.’ His voice got low and sultry, ‘I know when a woman is enjoying being kissed, moro mou, believe me.’

He was still behind her and Lucy was finding it increasingly difficult to concentrate, his voice was so hypnotic, resonating with something that pulled on her insides and left her weak.

‘Liar.’ came so softly from close behind her head that she jumped minutely, her skin breaking into goosebumps.

He moved to her side, Lucy fought against closing her eyes and wondered dimly why she just didn’t walk away, but she knew on some level that she was afraid if she moved she might fall down. She stayed rigid.

‘You did like it, when my tongue touched yours…when you let me explore the sweetness of that mouth. Did I tell you that I’m fascinated by the gap in your teeth? That right now all I want to do is kiss you again until you’re so boneless in my arms that all I’d have to do is carry you to the couch over there…’

Lucy’s breath had stopped, her brain had certainly stopped functioning. The couch was in her peripheral vision and Aristotle was right in front of her again. For a big man he moved as silently as a panther.

At that moment Lucy’s head did throb unmercifully, as if in league with him.

‘Then I’d start to undo your buttons, one by one, but I probably wouldn’t be able to resist kissing you again, feeling that delicious gap in your teeth with my tongue, coaxing you to bite down on me too so you could feel how I might taste.’

The sensation of what it might be like to bite into that sensual curve of his lower lip was shockingly vivid. Lucy was starting to quiver badly now, her eyes still closed tight, she felt hot and flushed all over and between her legs…her mind seized.

‘But you see, you wouldn’t want me to stop, as your shirt fell apart, baring those gorgeous breasts to my gaze…is the lace of your bra chafing you now Lucy? Are your nipples tight and tingling, aching for my touch, aching for my mouth? I would take those peaks and suck them into my mouth, hard, until they’re aroused to the point of pain.’

‘And then, I’d cover your body with mine, so that you could feel how turned on I am, even right now, I’d lift up your leg and let my hand slide up over the silk of your stocking, all the way to the soft pale flesh of your thigh. You’d be moaning softly, willing my hand even higher, to that secret place between your legs where you’re aching for me to find the silk of your pants drenched with desire, you’d beg for me to slide them aside so that I could feel for myself  – ‘

‘Stop!’ Lucy’s eyes flew open and in an instant she was jerking away, only realising at the last second that he wasn’t even holding her. He held up his hands to prove the point. Her breath was coming in short shallow gasps, her breasts felt heavy, tips tight and tingling, exactly as he’d described, and between her legs…seemed to burn a molten pool of something so dangerous and unwelcome…it was that that had finally woken her out of this awful,delicious, dream.

But it wasn’t delicious, it wasn’t, she told herself desperately as she looked anywhere but at Aristotle. She felt disoriented, dizzy, as if she could almost believe she had been on that couch. Her upper lip felt moist. Her hands clenched and she realised too that she no longer held the envelope. And in that instant she saw that it was in one of his hands and he was ripping it in two.

She put out a hand, ‘Wait! What are you doing?’

Lucy also realised along with everything else in that moment that contrary to her own state of near collapse, Aristotle looked cool calm and collected, a million miles away from the man who had been just whispering in her ear howaroused he was. She was a quivering wreck and he hadn’t even touched her.

His cool voice cut through her like a knife as she watched him turn on his heel and walk back around his desk, ‘I’m putting this letter of resignation where it belongs, in the bin.’ And he promptly did just that.

Lucy was a mess, still reeling from the effects of just how his voice and words had affected her, and how utterly unaffected he clearly was. He was sitting behind his desk now, for all the world as if nothing had just happened and as if he was waiting for her to sit and take notes.

His voice was curt. ‘We’ve been through this before, I told you to call me Aristotle. I don’t want to tell you again.’

Lucy all but exploded. ‘I am resigning. There is nothing you can do or say to stop me, I will not stay and be subjected to the kind of treatment you just…subjected me to.’

Aristotle was looking down, flicking through papers, and said easily, ‘Lucy I didn’t even have to touch you to turn you on, so when the time comes and I do touch you for real can you imagine how good it’s going to be? Why would you deny yourself that?’

For a million and one good reasons! Lucy saw red spots dance before her eyes, his words impacted her so deep and in a place so visceral she nearly screamed with frustration. Instead she swallowed it down and said as coolly and calmly as she could, ‘It’s clear that your arrogance is clouding your ability to assimilate this information, perhaps it’ll become more clear once I’ve gone. I can send you another copy of my resignation. Good day Mr Levakis.’

She turned on her heel and was almost at the door when she heard a deadly soft, ‘If you walk through that door Lucy Proctor, you’ll be hearing from my lawyers within the hour.’

Mistress to the Merciless Millionaire

The Virgin’s Secret
Scroll to top