Seduced for revenge, bedded for pleasure

Six months ago Brazilian tycoon Caleb Cameron thought he’d uncovered Maggie Holland’s plot to ruin him – by seducing him to take his mind off business deals worth millions!

In actual fact Maggie was being manipulated by her cruel stepfather. What was more, she fell in love with Caleb – but he said he never wanted to see her again.

However, now her stepfather has died, leaving Maggie and her mother with nothing – Caleb Cameron is the new owner of all their assets! And, as the final piece of his revenge, he’s got an offer Maggie cannot refuse: to keep their precious family home, she must become his mistress for two months!

Review of THE BRAZILIAN’S BLACKMAIL BARGAIN

Caleb Cameron assumed that Maggie Holland knew the score when her stepfather tried to ruin him by sabotaging his business. Now that her stepfather is dead, Caleb is the new owner of the family’s assets. In order for Maggie to reclaim her inheritance, she agrees to become his mistress for two months. Caleb finds Maggie confusing because she doesn’t act like his previous mistresses. When their time together is over and Maggie leaves behind all his gifts, Caleb realizes she was there for love. With Abby Green’s THE BRAZILIAN’S BLACKMAIL BARGAIN (4), a man who has never been loved for himself realizes, just before it’s too late, that he’s found the woman of his dreams. Even luckier for him, she’s willing to meet him more than halfway. 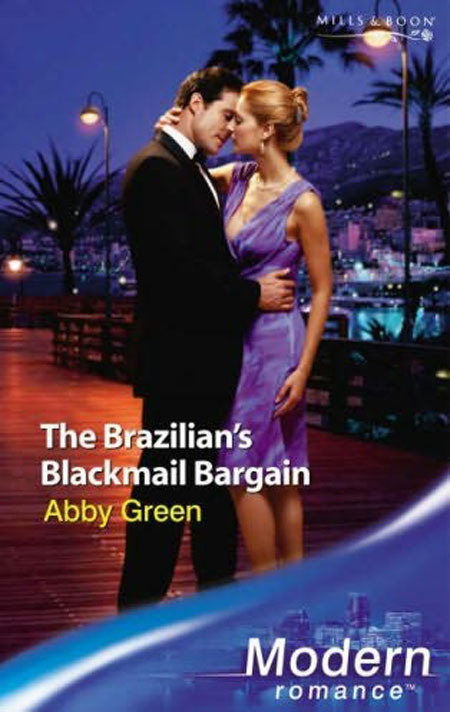 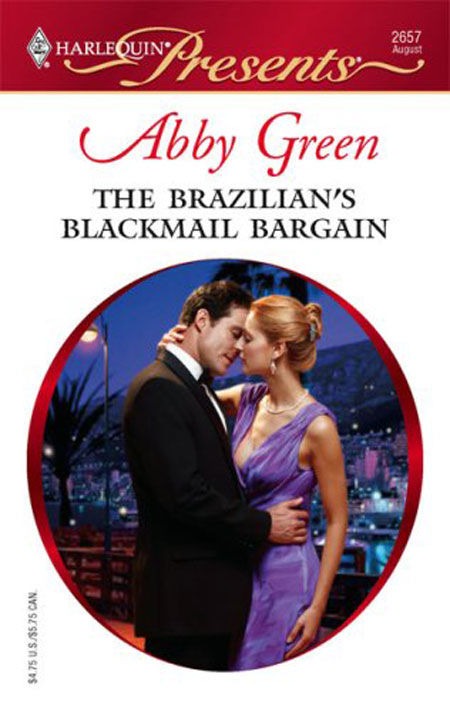 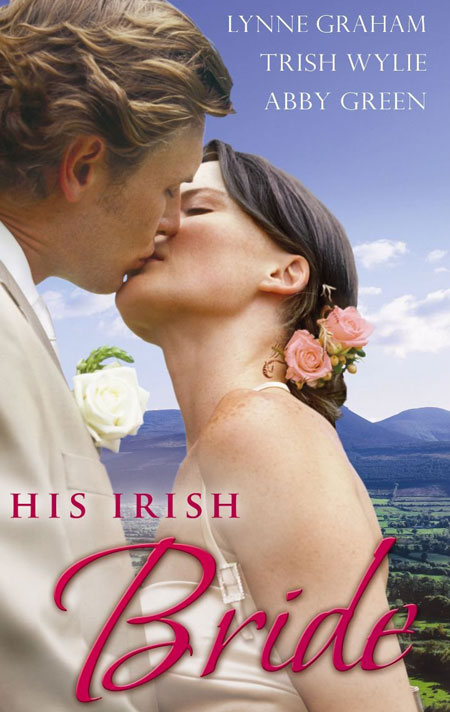 Also contained in the Anthology
His Irish Bride

‘You…you’ve taken over everything.’ Her voice was faint.

She was so transparent…

It gave Caleb such pleasure to know that he was pulling the rug of wealth from under her deceitful feet. He brought his glance that had shifted to take in the room back to her face.

The implied insult in his use of her surname was obvious and a part of her shrank back.

‘As of now I own every single business interest of your stepfather’s, including this very house. Naturally I declined to take on board his more dubious holdings, the inland revenue here and in the UK are currently investigating those and you might find that you’re due to come in for some hefty tax bills, they have a surprisingly low regard for offshore accounts that haven’t been declared.’

Maggie stood up galvanized into action by the explicit threat in his voice. For the first time since she had seen him again she tore her gaze away and looked at Mr. Murphy near the door.

‘Is this true? Can this be possible?’

The older man just nodded his head miserably. She looked back to Caleb, a wild panic rising up. He was utterly unconcerned, as if watching a fly on its back struggling to right itself.

‘But…but how is this possible? I mean how can we not have known?’ she feverishly went over everything in her pounding head. Even though they hadn’t seen Tom in months…how had they somehow missed noticing the dire straits he was leading them to? And how for the love of god was it possible that even now he was reaching out from the grave to ruin them…as if he hadn’t done enough already.

Because he tried to ruin this man in front of you, with your help…

She shut out the voice with difficulty. She couldn’t dwell on that now.

‘Mr. Murphy…’ she implored, incapable of saying another word. Her eyes said it all. Her solicitor took her arm and led her to sit down on a couch. She was glad of his protection from facing Caleb alone. She refused to acknowledge him just feet away, willing him to be gone with all of his threatening words and devastating presence.

‘I’m sorry Maggie but it is true. Your mother is potentially in debt to the revenue if they find that Tom was hiding funds in offshore accounts as they suspect, I can fight the case for you if it comes up but…’ he shrugged.

It was worse and worse. Maggie pressed a hand to her forehead. Caleb stood up with lithe grace and rearranged his cuffs negligently, Maggie looked at him warily from beneath dark lashes, her heart still hammering painfully.

‘Murphy I’ll leave the rest to you. Ms. Holland I have nothing more to say to you. I’ll expect you and your mother to be out of this house within two weeks, I trust that will give you time to sort yourselves out.’

He smiled cruelly, ‘I could have exercised my right to take the house today but would rather you be gone should I decide to move in.’

‘Yes. I’m doing some business in Dublin for a couple of months and need a bolt hole from the city, this place would serve nicely…’ he flicked a dismissive glance around the room, ‘After I’ve had it redecorated of course.’

Maggie stood up again, every inch of her body quivering in anger and reaction, this intrusion into their private sanctuary too much. ‘How dare you come in here and speak to me like this, on the very day of a funeral…have you no decency?’

‘Decency?’ he laughed mirthlessly. They had both forgotten the presence of the other man, standing close together, Maggie’s head bent back to look up, her throat exposed. She could feel the pulse beat rapidly at her neck. His eyes roved her face contemptuously, his lips curling in obvious distaste at what he saw. ‘You have a nerve to talk about decency…or should I inform our friend here exactly what role you played in your own downfall?’

So this was his revenge. He had gone after her stepfather with ruthless precision and now it was her turn. She looked at him aghast at his capacity to take vengeance to the very last degree. In his mind she had been just as complicit as Tom Holland and deserved everything she was getting.

Without a backward glance he strode from the room. It felt curiously flat and drained of colour after his explosive energy had left. She heard the doors close, the car start up, the gravel spurt from under the wheels as he sped away taking their lives with him. After he was gone Mr. Murphy stood too. Maggie looked at him blankly, still stunned.

‘As you can see, your stepfather bit off a little more than he could chew with Cameron, he’s never been known to suffer fools gladly and when your stepfather made a second bid to topple Cameron’s empire he unleashed the tiger.’

‘Well actually it was the third or fourth…your stepfather really had a bee in his bonnet about Cameron, saw him as the ultimate prize to win. I know you and your mother weren’t aware of most of Tom’s dealings. After he tried to take over the Cameron Corporation by legitimate means and failed, he then went underground…and used other tactics, but still couldn’t do it.’

Maggie felt sick. She remembered all too well her unwitting role in those tactics. It had been she who had been used in the effort to divert his attention for a crucial moment in time. Thank god Mr. Murphy didn’t seem to know too much and after all it had been in London, not Dublin.

The solicitor continued with a touch of awe in his voice, oblivious to Maggie’s turmoil, ‘Cameron systematically went through every one of Tom’s interests and with a lot more finesse managed to bring him to his knees, which was unusual really, Cameron isn’t known for going after his enemies so arbitrarily and mercilessly, he’s usually happy to cripple their defences, render them impotent.’ He shook his head, ‘Tom must have really pushed his buttons…’

‘Well he’s finished us too it would seem.’

‘Yes.’ He sighed heavily. ‘I’ve looked at it every which way and he really does have it all sewn up. About the revenue, I’m hoping if it comes to it that we can make a case…I can try to prove that your mother while being named in the will had no other part in her husband’s affairs.’

Maggie turned worried eyes to his, ‘But we don’t have anything anymore, no money…how could we afford…?’

He patted her hand, ‘Don’t worry about that now, I know how hard it’s been for your mother, I won’t let that man make her life worse than it’s already been if I can help it.’

With a few more comforting words he got up to leave and after Maggie had closed the front door she sagged against it. How on earth was she going to tell her mother? She knew this news would devastate her. For Maggie, her worst nightmare had just happened, coming face to face with Caleb Cameron again. She went back into the front room and for the first time in her life, with a shaking hand, poured herself a shot of brandy and swallowed it back in one gulp.

Chosen As The Frenchman’s Bride