You are here: Home1 / book2 / The Greek’s Unknown Bride

She doesn’t recognise her husband…

But her body does…

Sasha’s life changes beyond recognition after a shocking accident – her amnesia has made sure of that. She can’t even remember marrying Apollo, her devastatingly handsome Greek husband! Although she does remember their intimate, searing passion…

Then Sasha discovers the truth behind their less than perfect marriage, and is left with more questions than ever. Why can she only remember one night with Apollo? Why does their undeniable connection trouble him so? And is their tempestuous marriage strong enough to withstand revelations from her past…? 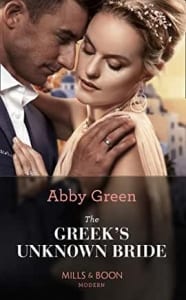 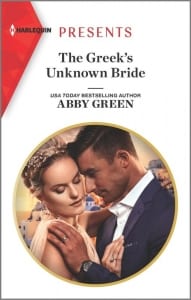 Apollo Vasilis stared out of the window at the ornamental lake set in lush grounds. Athens lay under a hazy smog in the distance, and the sea was a barely perceptible line on the horizon. But he noticed none of that. His arms were folded tightly across his chest and tension wound like a vice inside his body. A tension he’d been feeling for months now. Three months, to be precise.

There was a faint rhythmic beep-beep coming from behind him and suddenly it changed. Skipped a beat, and became slightly faster. Heart rate increasing. She was waking up. Finally.

He turned around. A woman lay on a raised bed. She was as pale as the sheets underneath her. Rose-gold hair spread around her head. There was a gauze dressing on her forehead, over her right eye.

There were bandages around one arm. A scratch down her left cheek. All in all, minor cuts and bruises. A miracle, considering the car that she’d been driving was at the bottom of a narrow ravine about one hundred metres deep, a charred mass of black twisted metal.

He moved closer to the bed. Her almost blonde lashes were so long they cast faint shadows on her cheeks. Her brows were darker, finely etched. He frowned. Her face looked…thinner. The bones of her cheeks were standing out more prominently than he seemed to remember.

But then…looking at this woman in any kind of forensic detail was not something he’d done lately.

Not since he’d looked at her as if he’d never seen a woman before. Four months ago, when they’d first met. When her naked body had filled his vision and made his blood roar so loudly it had deafened him.

To Apollo’s surprise and consternation, a heat he hadn’t felt in months flooded his veins. He rejected it utterly. This woman had deceived him in the worst way possible.

At that same moment that her eyelids fluttered, the door opened and the doctor and a couple of nurses entered. The female doctor looked at Apollo. ‘I need to remind you not to expect too much at first. The extent of the injury to her head can only really be ascertained once she regains consciousness.’

Apollo nodded curtly, and watched as they tended to the machines around the bed. The doctor sat down beside the woman and took her hand. ‘My dear, can you hear me? Can you open your eyes for me?’

Apollo could see movement behind the delicate eyelids. For a second he found himself holding his breath as her eyelids fluttered again. As if, for a moment, he’d forgotten, and a small part of him actually cared if his wife woke up or not.