He would take revenge by taking her as his bride…

It was the society wedding of the year! When Greek shipping magnate Alexandros Kouros wed Kallie Demarchis, press pictures showed a couple who were madly in love – but behind the glamorous, happy scenes lay a very different story…Love had nothing to do with it; Kallie knew she had no choice if she wanted to save her family’s business. She also knew that Alex would have sweet revenge for the mistake that had shattered both their pasts when he took her as his arranged bride…

Review of THE KOUROS MARRIAGE REVENGE

After reading THE KOUROS MARRIAGE REVENGE, fans of Mills and Boon Modern Romance will immediately add new writer Abby Green to their auto buy list. Sexy, passionate and sophisticated, The Kouros Marriage Revenge is Modern Romance at its unputdownable best!

When she was just seventeen years old, Kallie Demarchis had fallen passionately in love with family friend Alexandros Kouros and egged on by her malicious cousin Eleni, Kallie had confessed her feelings to Alexandros and kissed him – unaware that her clumsy advances would not only be rejected by Alexandros, but also be splashed all over the tabloids. But Kallie’s embarrassment was the least of her worries when she realized that Alexandros was absolutely furious with her. Having cost him his engagement to a wealthy Greek supermodel, Alexandros vows never to clap eyes on Kallie ever again.

But will Alexandros ever manage to get over Kallie’s past betrayal? In The Kouros Marriage Revenge, Abby Green blends sizzling sensuality with intense drama, heart pounding emotion and exhilarating sexual tension in this wonderful tale of passion and revenge which will keep readers riveted from the first page till the last.

Glamorous, passionate and emotional, The Kouros Marriage Revenge is a Mills and Boon Modern Romance you’d be a fool to miss! 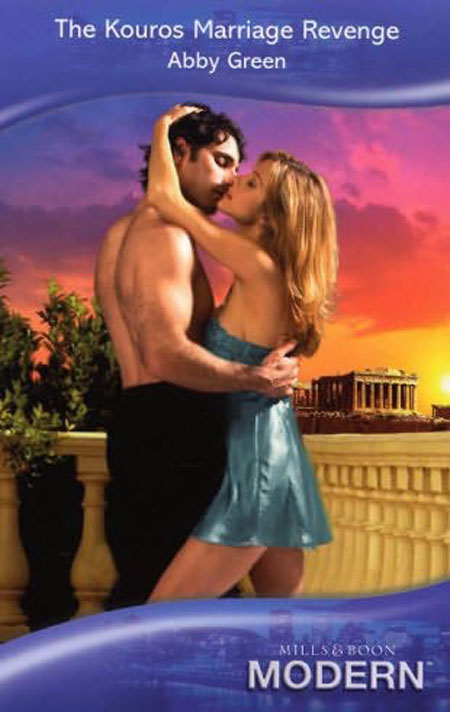 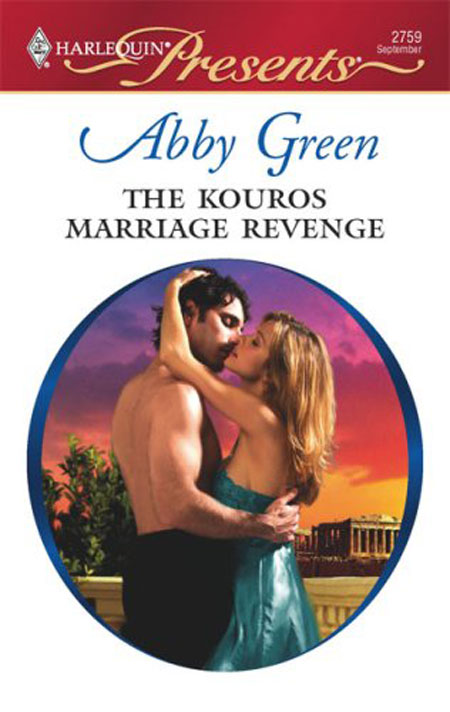 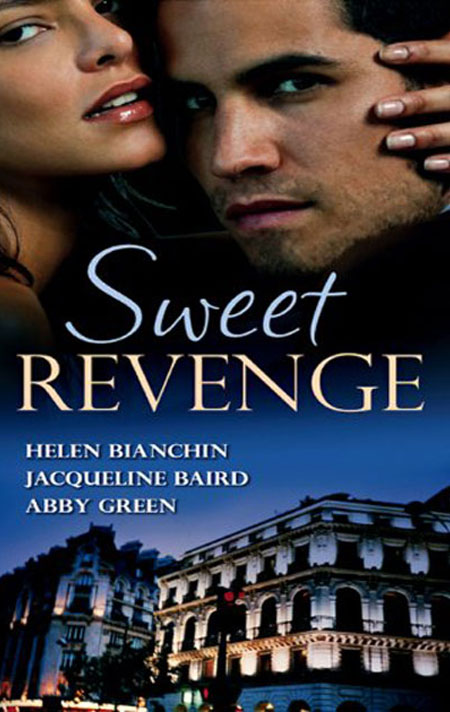 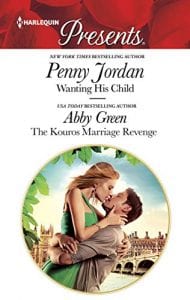 When Kallie got back to her office Alexandros was waiting for her. Her whole body stiffened in a blatant rejection of what was to come the next day. He noted it with narrowed eyes as he watched her walk in from behind her desk. As at home as if he sat there every day. He made a thorough study of her, up and down, taking in the black pencil skirt, the cream high necked shirt of which she was supremely grateful for now.

‘Can I help you with something?’

He uncurled his tall length from the chair and came around the table. Devastatingly compelling in a dark suit and dark shirt. Kallie took a step back. The room seemed to have become as hot as hades in seconds. Alexandros flicked his head to indicate the window and looked out. Kallie walked over very warily, keeping a good distance but even that couldn’t stop the frisson of awareness running through her.

Outside, swarming on the pavement were what seemed to be hundreds of photographers. The circus that surrounded Alexandros Kouros. He came and stood beside her. Her skin prickled uncomfortably. So far he hadn’t said a word. The moment seemed to stretch forever. And finally with silky deadliness he said softly, ‘You see that? They’re all going to be waiting outside the office of the Mairie tomorrow. Waiting to see you arrive, go in and then come out on my arm. And they’re going to get the pictures they want. If you’re planning any little surprises, like not turning up, then I will find you Kallie…and I will take you as far away from here as I can, and we will be married where you will have no escape…’

She turned to face him, dread in her body at his cold tone. This stranger before her. Bitterness laced her voice, ‘I’ve already told you I’d marry you. I’d do anything to save my family from ruin. Even if it means marrying you and subjecting myself to a period of purgatory.’

He turned to face her, his face stamped with arrogance and a sensuality that even now called to her on some base, carnal level. She hated him. She knew she kept telling herself that…and knew it felt as though she was trying to convince herself.

He reached out a finger and trailed it along her jaw. She clenched it and he tapped where it bulged out against her smooth skin.

‘Such dramatic language Kallie. When you set me up all those years ago, when I was considered as close as family, it’s made me very wary. I’m just warning you…what will happen if you decide to leave your family to their fate. That’s all.’

He was so far off base from how Kallie felt that her head swam. She would never, ever do something to hurt her family. It seemed as if everything, every conversation that had ever passed between them had turned to poisoned ashes. And amounted to nothing. He’d decided to judge her solely based on what he’d perceived her to have done seven years ago.

She straightened her shoulders and stuck her chin out.

‘I will be there tomorrow Alexandros…and believe me, you’re going to be sorry you ever married me.’

‘Somehow…I don’t think so. But I admire your attempt at bravado. One other thing, I’ve asked members of our families, just as a little added…insurance.’ Kallie felt her throat clog and wanted nothing more than to hit him right in the solar plexus, wipe that smug smirk from his face. But then he snaked a hand around the back of her head, through her hair and pulled her softly to him. Panic coursed through her. Her hands came up in an instinctive and classic defense pose between them.

‘What do you think you’re doing?’ She tingled with anticipation.

And before she could speak another word, his head had dipped, daylight disappeared and his mouth was on hers. Warm and intoxicating and hot and…words disappeared, Kallie found her hands resting against his broad chest, the heat emanating over her skin, making her heat up all over. She felt herself wanting to melt into him, against his hard length. His lips moved against hers, hard and insistent…a completely instinctive unbidden response made her open her mouth and at the first touch of his tongue to hers, an explosive heat erupted deep in her belly.

She dimly felt him pulling her in tighter, lifting her up against him…she wanted nothing more than to give in…lean against him, savour the support…her eyes flew open. His were shut. Hidden.

What was wrong with her? What was she thinking?

She welcomed reality, letting it flow through her like ice, dousing the flame of desire that wanted to burst into flame like a flash fire. His mouth was still moving over hers, and a weak part of her was an insistent voice saying, give in, give in.

She clenched her hands into fists with a huge effort and pushed against his chest. It was like a steel wall, immovable. She twisted her mouth away from his and was shocked at how ragged her breathing was. Pushing her chest against his, making her very ware of how her breasts had begun to ache, her nipples so hard they chafed against her bra. He tried to twist her head back and Kallie struggled in earnest now, beating against his chest, breath coming more and more ragged and jerky. She still couldn’t speak.

He finally loosened his hold and Kallie used it to push herself out of his arms, staggering back against the desk behind her. If it hadn’t been there, she would have fallen to the ground, she knew that for sure. Her hands clung to the ridges behind her, her entire body pulsed, heat melted the ice and she knew the strongest urge to throw herself back into his arms and beg him to kiss her again. She tried to bring her breathing under control and marveled that kissing him so chastely at seventeen, certainly hadn’t prepared her for this…

She was undone. In the space of seconds. Had given in spectacularly before she’d stopped, letting him know of her weak acquiescence. She couldn’t look up and saw his feet some into her line of vision on the ground in front of her. A hand came under her chin tipping it up to face him and she shut her eyes.

‘Kallie, closing your eyes isn’t going to make the truth go away.’

Against her better judgment she opened them and tensed herself for the look of triumph. But it wasn’t there. Instead was a look she couldn’t read and his eyes were dark, darker than she’d ever seen them. With deep glowing embers in their depths. Embers that she had lit? The thought made something rip through her. She trembled.

She had to try and claw back some modicum of dignity and found a voice from somewhere.

‘Truth…’ she didn’t even have the energy to voice it as a question.

‘That there’s enough electricity between us to power the national grid…’ his eyes fell to her mouth and Kallie felt it quiver in response as if it were begging for his own lips again.

‘And that tomorrow we get married and…this, we’ll come back to. We’ll have plenty of time on our honeymoon.’

Kallie opened her mouth and couldn’t speak for a few seconds. Honeymoon!‘That’s ridiculous. There’s no way this is going to happen,’ Panic was making her sound breathless, ‘I am not going anywhere with you for any honeymoon, I have to work, I can’t just leave –‘

He put a finger to her mouth. ‘Oh yes you are. It’s part of the deal. Make sure you’re packed…’

Bought for The Frenchman’s Pleasure
Scroll to top