Back in her husband’s bed…

Rowan had discovered two things that would change her life forever. The first filled her with joy – she was pregnant! The second was something that she felt compelled to keep to herself – even from her husband…

Rowan had been Isandro Salazar’s bride of convenience. But, knowing that he would never love her as she loved him, her choice was to make her unborn child her priority and then, once he was born, make her dark journey by herself…

But in Isandro’s eyes Rowan’s decision rendered her a gold-digger who had committed the worst possible crime. However, he couldn’t stop her seeing her baby son – or deny that the passion between them was as raw and intense as ever…

Review of THE SPANIARD’S MARRIAGE BARGAIN

THE SPANIARD’S MARRIAGE BARGAIN (4) by Abby Green: When Rowan Carmichael agreed to a marriage of convenience with Isandro Vicario Salazar, she yearned for their attraction to develop into something more. But the unthinkable happens and she abandons him and their son, Zac, leaving her husband furious. Three years later, a surprise reunion causes Rowan to faint at Isandro’s feet, but he thinks his money-hungry wife is just pretending to want to be part of her son’s life. When she returns with him to the small town of Seville to prove her good intentions, Isandro cannot control his lustful reaction to the woman he plans to divorce. Readers will be quickly turning pages to see how this passionate and emotionally charged story unfolds. 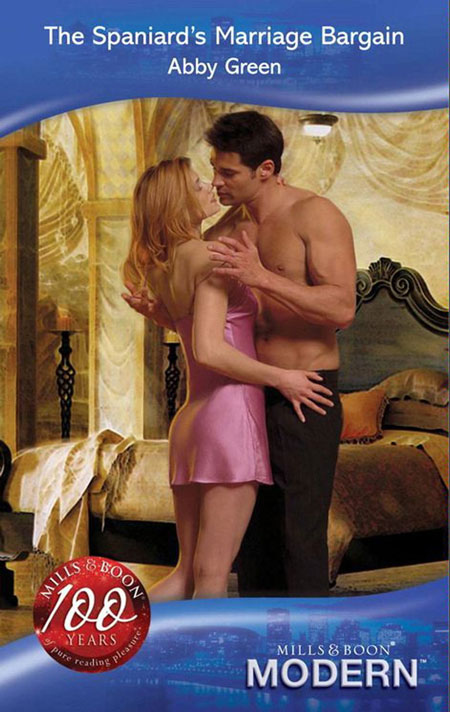 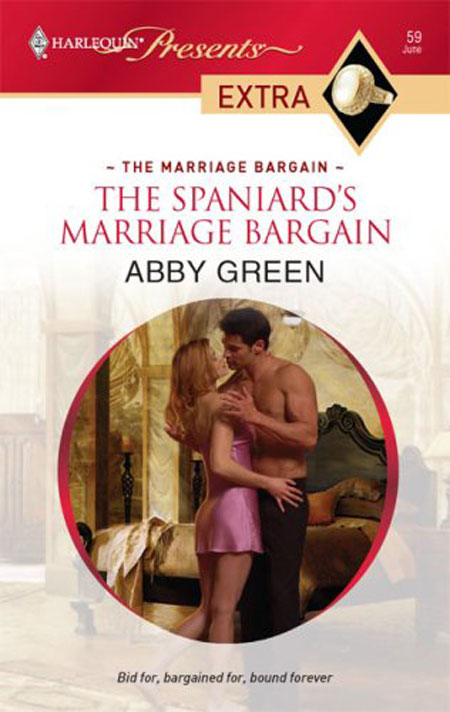 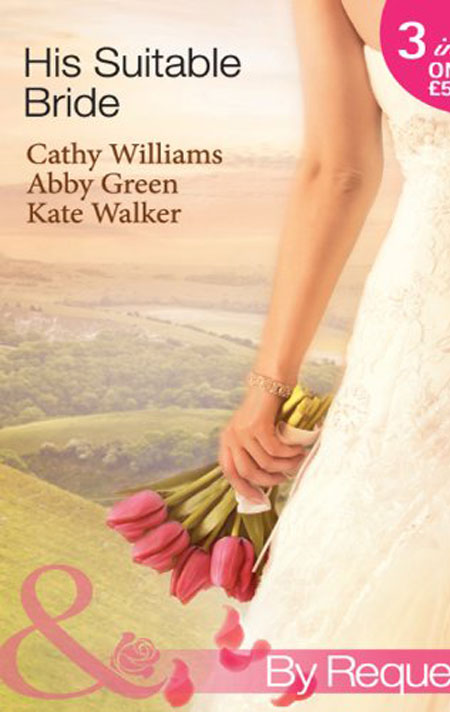 Also contained in the Anthology
His Suitable Bride
March 1, 2012

Rowan Carmichael faltered slightly as she stepped into the minimalist lobby of the small boutique hotel, she hadn’t realised it was so exclusive. Even though she was well dressed, well enough to look as if she belonged here, she felt as though everyone must surely be able to see under her skin…to the very heart of her that beat so unsteadily. God. It had been so long since she’d been in a place like this. Another lifetime, another woman. She should have picked a more down at heel hotel. This kind of hushed luxuriousness reminded her of too much and made the skin on the back of her neck prickle…which was crazy.

She was completely oblivious to the several appreciative looks she drew with her dark red hair and flawless creamy skin, which contrasted with her ever so slightly awkward grace as she moved.

Her expressive full mouth tightened as she looked for a seat willing herself not to let the rising panic overwhelm her. She couldn’t think of the past now, it was gone and with it – her step faltered again as a slicing pain ripped through her stunning her with its intensity. With its rawness, its newness…even though it was old. And she felt old, a lot older than her twenty seven years.

She found an empty seat and sank into gratefully. Within moments a waiter had come to take her order of earl grey tea. She sat back and crossed her legs taking a deep breath. She had to get it together, had to be in control and above all calm.

She would have to discuss with a solicitor in less than ten minutes how she could best contact the husband she’d walked away from two years ago…and her baby – that slicing pain gripped her again and she was made aware how tenuous her control was. She needed time to gather herself, perhaps she’d been silly scheduling the appointment so soon; she was literally just off the train. This was the first time she was out in public again in two years. In the busy heaving metropolis of London. Somewhere she’d truly never expected to be, ever again.

No. She couldn’t think like that. She’d be fine. After all hadn’t she been through so much worse?

This was the first day of the rest of her life. A new page, a new chapter.

A new beginning. And perhaps…a tiny alien bird of hope fluttered in her chest, perhaps another chance at happiness? Even though in truth, she’d had precious little happiness in her life so far…

Just then her attention was taken by a little boy who was running and fell headlong at her feet on the marble floor. With instinctive and unquestioning swiftness, Rowan was out of her seat and bending to lift the boy up gently, her hands under his arms, a reassuring smile on her face.

‘It’s ok sweetheart, I don’t think you’ve really hurt yourself have you? You look like a very brave boy.’

He stood unsteadily on chubby legs, his face veering between crying and not crying, a lip wobbled. He was adorable. Dark blonde hair, olive skin…and huge eyes…they were the colour of violets. Unusual and distinctive.

Too unusual and distinctive.

Shock slammed into Rowan like a punch in the gut. They were in fact, the exact same unique shade of violet that looked back at her in her own mirror every day. With that thought came a surge of something so instinctive, so primal, so inexplicable…Rowan felt the world flip over and right itself again at an angle.

She held onto the boy. He’d obviously decided against crying and looked at her guilelessly, his mouth cracking into a huge grin, showing tiny baby teeth. He rubbed his forehead and babbled something unintelligible but she didn’t hear him. The shock was so intense that she couldn’t breathe with it.

Had she dreamt of this moment for so long that she was hallucinating?

That was it. And perhaps arriving back like this was too much…perhaps…but as she looked into his face, those eyes, she knew rationally it couldn’t be possible…yet… her heart told another story. Every instinct clamouring loudly.

She started to feel slightly desperate. Was this going to happen every time she saw a boy his age? Surely someone had to see her, had to know. Had to take him away from her because she didn’t think she would be able to move, ever again. Or let him go.

Black shod feet had appeared behind the boy. A man. There was a blur of movement and she had a sense of his size, his magnetism, even just in that quick moment as he bent down to pick the little boy up. His scent washed over her. It was familiar. Her heart had already stopped beating. Blood froze in her veins. Her hands dropped.

A coolly cultivated deep voice came from far above her head. The man spoke with a slight accent that was barely noticeable, ‘…need eyes in the back of your head, they move so fast…’

She couldn’t believe what she was hearing, or seeing. He was tall, so tall that even when Rowan stood fully – she didn’t know how – he towered over her own not inconsiderable height. He was so sinfully handsome that her brain seized, exactly the way it had when she had seen him for the first time.

This couldn’t be happening. This was too too cruel. Life couldn’t be this harsh. And yet, she knew well that it could.

He was still talking. And then abruptly he stopped, the warm smile faded. Dark blonde brows drew together over piercingly light blue eyes. The colour of blue ice. They pierced all the way through to Rowan’s heart and soul, ripping her open. Laying her bare to the myriad expressions crossing his face; the shock of recognition, disbelief…and then something much more potent. Disgust, anger…hatred. Rejection.

Rowan felt her mouth move as if to speak. But nothing came out. Everything seemed to hurtle around them in fast forward, but they were cocooned in an invisible bubble. Suspended in time. She looked at the little boy held high in his arms and that was her downfall. She felt like her heart would explode. It was all too much. She had one coherent thought before she slid into a dead faint at her husband’s feet: my baby.