You are here: Home1 / book2 / Their One-Night Rio Reunion

For one year he’s kept his distance…

For one night he can’t resist!

When Ana Diaz conveniently wed tycoon Caio Salazar, her husband was coolly clear on the terms: one year of marriage to expand his empire and secure Ana’s freedom. Yet the ink is barely dry on their divorce papers before a security threat forces them together for twenty-four hours!

When they’re finally alone, the innocent bride who invades Caio’s dreams becomes temptation personified. It’s the last thing he wants, having closed himself to the chaos of love. Unless Ana can prove their bond is stronger than his self-preservation… 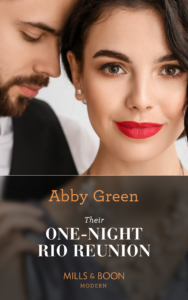 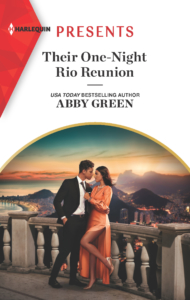 Caio Salazar turned around to see his solicitor putting papers down on the wide oak table with little pointed stickers indicating where to sign. He held out a pen, ‘These are the final signatures required for your divorce papers.’

Divorce. Caio Salazar took the pen and sat down. He had never intended to get married. It hadn’t been part of his plans. Not after witnessing his parents’ toxic mess of a marriage. He was lucky. He had older brothers who had borne the burden of inheriting the legendary Salazar de Barros wealth and industry, leaving Caio free to strike out on his own and unshackle himself from the yoke of his family losing de Barros en route.

The success of his self – made business had put paid to any rumours that he wouldn’t survive without his family’s help. He’d not only survived, he’d become one of Brazil’s top net worth individuals, rivalling his own family’s dominance single – handedly.

Leaving him free to live an independent life, beholden to none. Which he’d made the most of at first – cultivating quite the reputation as the playboy rebel, cutting a swathe through Brazil’s legendary nightlife and most beautiful women, which had been fun but admittedly had had more to do with irritating his old man than sating his own appetites.

In truth, that life had begun to lose its pall some time ago. Caio had felt increasingly like he was going through the motions, living down to a reputation he’d created that no longer served him, or amused him.

So when his forays into Europe and North America had started falling flat among rumours that his reputation was too volatile, Caio realised he was in danger of ruining everything he’d built up. And there were plenty of people waiting to see him take a very public fall from grace.

He wouldn’t give them the satisfaction and he wasn’t that self – destructive. And so he’d considered the unthinkable – the fastest route to turning his reputation around – a solid marriage to a suitable woman.

And so, almost a year ago to the day, he’d married a daughter from one of Rio de Janeiro’s most prominent families, taking everyone by surprise. The marriage had been a serendipitous by – product of a deal with Rodolfo Diaz.

The media mogul had a daughter he’d wanted to see married and Caio had need of a wife. The fact that she came from a suitable background and a similar lineage to Caio was a bonus. It would make the marriage look even more authentic.

However Caio had only agreed to think about the union once he’d met with Ana Diaz. Their first meeting hadn’t been auspicious. An unfashionably long veil of dark hair obscured her features and loose clothes had drowned any view of her body. Of average height, she hadn’t made much of an impression.

But then her father had taken her chin in his fingers and tipped her face up, and her hair had fallen back to reveal a pretty heart – shaped face, pale, with dark arching brows.

Her soft mouth was set in a mutinous line. Her dark brown eyes had flashed with defiance as her father spoke to Caio, and she’d pulled away from her father and said angrily, ‘I’m not a chattal to be passed around between men.’

In that moment bristling with tension between father and daughter Caio had recognised that there was a very real danger that she would provoke her father to violence. He’d smelled it like a metallic tang in the air. He knew because he’d smelled it before.

It had impacted him right in his gut, even though she was a complete stranger.

Before he’d had time to analyse his reaction, he’d decided that he would marry her. He’d asked her father to leave them alone to discuss it and she’d turned that barely concealed fury on him.

To Caio’s surprise, even though the woman before him was as non – descript as a student, something had pulsed to life in his blood and he’d told himself it was just confirmation that he was making the right decision to save his reputation and move his business forward.

He couldn’t have contemplated a marriage of convenience with one of his lovers. That spelled disaster and drama.

No, marrying a total stranger albeit from the right family and background was perfect. When they divorced she would be a very rich woman. No harm, no foul. He’d assured himself that it had had nothing to do with the protective instinct aroused within him when he’d sensed the violence in the air from her father. Or, the disturbing physical reaction that he’d dismissed as an aberration as soon as it happened.

And so, just over a year ago, the wedding had been discreet and conducted with little fanfare. It had caused a flurry of interest at first but that had died down quickly. After all, strategic marriages between the families of Brazil’s wealthiest families happened all the time.

And now today, the divorce was an equally understated affair.

In many regards the marriage had been a complete success. Ana had travelled the world with him as he’d taken his company global, opening offices in New York, London and Bangkok.

With a wife by his side he’d been accepted among the business community and society without question because he wasn’t a playboy threatening to leave a storm of headlines in his wake as he bedded his way through Europe and North America.

In fact, much to Caio’s surprise, he’d found that he’d been singularly unenticed by any of the women who had made it very clear that they were available. He’d discovered that having a wife had been no deterrent in that regard.

Caio looked across the room at the back of the woman who stood in front of one of the floor to ceiling windows that showcased a jaw – dropping view of the financial district of Rio de Janeiro, early morning sunlight making the tall buildings sparkle and shine.

His wife no longer had unfashionably long hair. Now it was cut much shorter into a bob that brushed her shoulders and framed her face. A face that he hadn’t fully appreciated when they’d first met. A face that had revealed its beauty in such a way as to mock Caio daily for having first assumed she was average.

She wore a little make – up now, expertly applied, highlighting dark, long – lashed brown eyes, framed by naturally arching brows. Flawless light olive skin. Her nose had a slightly patrician bump. But it was her mouth that he’d grown more and more fixated by; soft and naturally pouting. Sometimes giving her an air of intense vulnerability and more recently and disturbingly, an air of something much closer to sultry, almost provocative.

The shapeless clothes she’d favoured when they’d first met were long gone. Today she wore a designer slim – fitting black trouser suit paired with a grey silk shirt and black high – heels, drawing attention to her slender ankles. Discreet jewellery. Even in heels, she was still a full head shorter than him.

A low cough alerted him to the fact that his solicitor was waiting for him to sign the papers. What the hell was wrong with him? This marriage was always destined to end today and Caio had achieved exactly what he’d set out to achieve a year ago.

Ignoring the knot of resistance in his gut, Caio signed the papers and handed the pen back to his solicitor.

The Kiss She Claimed From The Greek
Scroll to top