You are here: Home1 / book2 / An Innocent, A Seduction, A Secret

And a life-changing consequence!

When brooding Argentinean Seb Rivas spies elfin Edie Munroe’s talent for lavish interior decoration, he makes an irresistible job offer—to spend the festive season decorating his opulent home, no expense spared! Their desire flares hotly and, snowed in together, Edie becomes the sensual gift Seb wishes to unwrap. But in taking her innocence, neither realizes their overwhelming passion could have such shocking results…

Indulge in this intense pregnancy romance! 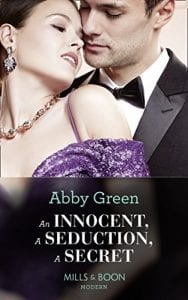 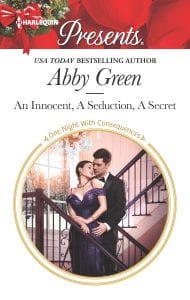 Edie Munroe was standing looking at the closed drapes like someone who’d been hypnotised. Or hit over the head. She’d never in a million years expected to see that guy again and yet…she just had.

And it struck her today as forcibly as it had four years ago when she’d first laid eyes on him in a crowded nightclub in Edinburgh.

It couldn’t be him, she told herself now, feeling her skin raise into goose bumps. It couldn’t be Sebastio Rivas. The fact that she even remembered his name was not welcome.

What were the chances it washim? It had to be someone who looked liked him. After all, Sebastio Rivas was a mega – famous international rugby star. What on earth would he be doing walking down a random side street in London?

But her accelerated heart – rate told her it washim. It was galling to be reminded that no other man in four years had had the same effect on her. And she’d tried. She’d gone on Tinder dates, blind dates and internet dates. But on each date – when they’d tried to take things a step further – Edie had felt herself shutting down.

Because she couldn’t get out of her head how he’dmade her feel four years ago. Alive and energised. Buzzing. Connected. Hopeful.

And, aroused. For the first time in her life she’d understood what people talked about when they spoke of instant attraction, or, you’ll know when you feel it. She had felt it, like a palpable energy. Electricity.

It had been wholly new sense of desire, and she’d known instinctively that only he could assuage the building sense of excitement in her core. A crazy assertion to have about a total stranger, but one so deep she could still feel it today.

It was pathetic. Her entire exchange with Sebastio Rivas had lasted about five minutes. He’d told her to run along. He’d been out of bounds, out of her league, and he hadn’t hesitated in letting her know.

The fact that she’d gravitated across a heaving dance – floor to orbit the sun of his smouldering sexuality – like every other woman in the room – was as freshly humiliating today as it had been then, especially after he’d sent her on her way.

She’d just come through a major ordeal – cancer, which she’d contracted when she was seventeen, throwing her life into instant turmoil. It had become a fight for survival, an endless round of toxic treatments and sterile hospital rooms.

For the previous eighteen months she hadn’t known if she would live or die, and some of the time she’d been feeling so sick, she’d almost wished – Edie clamped down on that thought, remembering her parents’ worried pinched faces.

That very day she’d been given the all – clear, and that night had been her first foray back into the world. She’d felt as if a layer of skin had been removed, making everything feel too bright, too sharp. Too much.

She remembered that she’d been wearing a dress borrowed from a friend. Short, silver and slinky. Not her style at all. But then, that whole night had been about a celebration she’d never expected to experience. A celebration of life.

And, because her hair hadn’t yet started to grow back, she’d been wearing a wig. A shoulder – length bob. Bright red, and hot and scratchy. Yet, none of that had stopped her from approaching the most beautiful man in the room.

She’d never seen, or met a man who’d come close to his sheer charisma and good – looks. Well over six foot, he’d had the leanly muscled build of an elite athlete. The power in his body evident under his dark suit.

A little desperately she tried to tell herself again that the man she’d just seen outside couldn’t be him. But she’d never forget that face – sculpted from stone. All slashing lines and sharp bones. Hard jaw. Deep – set eyes under black brows. Thick dark hair flopping messily over his forehead. Curling around his collar.

And a mouth made for sin. Full and sensual. Softening those hard lines and the stern demeanor he’d exuded like a force – field.

She whirled around, aghast at her reaction to someone who probably wasn’t even the man she was thinking of. She was losing it. ‘Of course, Jimmy.’

She gabbled, ‘I think the man in the window – I mean, the man in the moon decoration works better than the star.’ She hoped Jimmy wouldn’t see her face flaming at her freudian slip.

‘Not that anyone will see it,’ grumbled the young man as he came down the ladder. ‘We’re all the way around the corner from the main windows.’

Edie said brightly, ‘It means we can be more creative with our wee display.’

‘Weebeing the operative word. I hate the way the big designers get to dress the main windows now, it’s so…commercial.’

‘I know,’ said Edie, hiding a smile at the art student’s dismay and forcing her mind away from the past. She’d never got to college herself and had worked her way up the ranks to be a creative display supervisor. ‘That’s the way it is now, and I’m sure they’ll be beautiful.’

Privately, Edie agreed. She too loved the magic and fantasy surrounding Christmas. She loved everything about Christmas. She was trying to create a little magic in this window, in spite of the fact that not many would see it.

But, times had changed and now the big fashion designers had more sway than the in – house creatives, especially at Christmas time.

She pulled out another box full of decorations and said, ‘Right, we’ll have a quick tea break and then get started with this lot. The window has to be finished by this evening.’

Jimmy mock saluted her. ‘Aye aye boss.’ Edie smiled at his cheeky grin as he escaped for his break. She looked at her watch and sighed. She knew she could take a break too, but if they wanted this window to be finished…she decided to keep going. As soon as her mind was occupied with nothing more than unwrapping decorations though, it invariably wandered back to the man. And to him.

Edie looked up at the drapes suspiciously. She got up from the stool she’d perched on and went over cautiously, peeking out through a gap.

Of course the street was empty now. Strange to feel disappointed. And silly. Maybe she’d conjured him up out of some subconscious fantasy she’d never admitted that she’d harboured?

Edie pulled the curtains closed firmly and turned around, ready to put all random thoughts of disturbing men and memories out of her mind. She heard a sound and looked up with a smile on her face, expecting it to be Jimmy again. But it wasn’t Jimmy. The smile promptly slid off her face.

Her supervisor, Helen, was standing in the doorway to the window space and behind her was…him. Even taller and more intimidating than she remembered. Not a fantasy. Real.

Awakened By The Scarred Italian
Scroll to top