A Ring For The Spaniard’s Revenge

You are here: Home1 / book2 / A Ring For The Spaniard’s Revenge

A RING FOR THE SPANIARD’S REVENGE

But now he’s calling the shots!

For self-made billionaire Vidal Suarez, nothing is out of reach. Except exacting revenge on Eva Flores, whose family left a painful mark on his impoverished childhood. Until Eva comes to Vidal to beg for his help. He’s prepared to agree. His one condition? She has to pose as his fiancée!

Eva is the perfect addition to Vidal’s tech empire on paper. In reality, the penniless heiress jeopardizes his control as the long-dormant embers between them threaten to become an inferno. Which leads Vidal to ask what he craves most—vengeance or Eva? 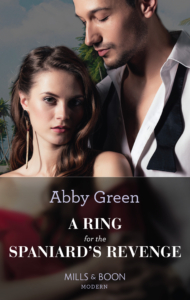 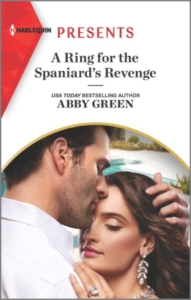 A Ring For The Spaniard’s Revenge

Eva Flores shivered even though the sun was shining and the early autumn temperature was balmy. She should be feeling relieved. Happy, even. But she wasn’t even sure she’d know what happy felt like because it had never been a dominant emotion for her. She knew she’d only ever felt it on distinct occasions.

Before she could ruminate on that unpalatable revelation, she figured that she could work with relieved. Beyond relieved. After a year of trying to sell the castillo she’d grown up in, the only home she’d ever known, a potential buyer had finally materialised.

He was due to come and visit now, as a precursor to signing the contracts, and when she’d expressed concern the solicitor had assured her, ‘He is very interested. He’s the kind of man who wouldn’t be taking time out of his busy schedule if he hadn’t already made up his mind. He just wanted to do this as a formality.’

Still, Eva couldn’t help trying to temper her relief with a bit of caution. He hadn’t signed yet and until he did, this crumbling mausoleum was still hers, with all its bleak memories, loneliness and massive debts.

The castillo had felt like a prison for a long time and it effectively still was. Binding her here until she could get rid of it.

She was walking through the rambling gardens, long since neglected and overgrown since their last member of staff had left. Eva’s gut clenched. She definitely didn’t want to go down that memory lane. Much better to focus on the fact that soon she could begin her life in earnest and try to put her past behind her.

This place had claimed too much of her life. And yet she still felt a compulsion to walk its paths, as if to lay some ghost to rest. The ghost of her mother. A familiar swell of something far more complicated that just plain grief rose up inside Eva. It was grief and anger and a sense of futility. Her mother had dictated Eva’s life in such a controlling way that it was only through her death that Eva been able to get some perspective and enough space to start figuring out who she was.

She halted now at the a rusted wrought iron gate that led into a small walled garden with a fountain in the center. Eva stepped inside and the heady scent of blooms in their last throes of season filled her nostrils.

Weeds ran rampant through the cracks in the stones on the ground and in every nook and cranny of the brick walls. She should feel guilty that it had gone to such waste but all she felt was empty. Numb.

She turned around slowly to see where an elaborately decorated gazebo stood in a corner, almost hidden by foliage. A beautiful and whimsical piece of architecture that some previous ancestor had had installed. It certainly hadn’t been her parents who had shared no love at all, her father eventually walking out and leaving them when Eva was eight.

That act had thrown her mother into a deep pit of bitterness and despair and had made her toxic. She’d turned to Eva as a vessel to project all of her betrayal and towering rage seeing in her daughter an opportunity to make sure she was never hurt in the same way. And so far, Eva could attest, she hadn’t been. So maybe her mother’s legacy had worked.

After all, it wasn’t as if she’d had an opportunity to meet anyone to be hurt. Except for – she shut down her mind. Thinking of him caused a maelstrom of emotions that Eva didn’t want to investigate. He always had, ever since she’d first laid eyes on him when she’d been a young teenager. Tall and more beautiful than anything she’d ever seen in her life. Even then she’d known that he connected with her in a way that scared her and that she didn’t fully understand.

Her mother had seen it though. She’d found Eva watching him out of the window one day when he’d been working in the garden. Shirtless. Olive skin gleaming. Strong muscles flexing. Her mother had drawn her close and said, ‘A boy like him is driven purely by brute desires, Eva. You are worth so much more than him. But that doesn’t mean that you can’t remind him of that…’

She’d had no idea what her mother was talking about but it had become apparent over the years. Her mother had wanted her to entice him. To provoke those brute desires so she could rise above them and laugh at him. To remind him of his place and the fact that she was totally unattainable.

The only problem was that he hadn’t been a brute. Far from it. He’d been studious, polite and…sexy. Eva had become progressively more and more aware of him so that by that last summer when she’d turned eighteen, she’d felt like a tinder box about to blow up with surging desires and aching needs and emotions far too confusing to know how to handle. So she hadn’t handled them.

The last time she’d seen him had been here in this space, the last time it had looked as it should.

She could still remember him, so tall and powerful. Short dark hair. Serious expression. Looking at her with a mixture of wariness, pity and anger. It had enflamed her. She’d desperately wanted to provoke a reaction. And she had.

Her skin prickled at the memory. Unconsciously she curled her fingers over her palm. She could still feel the heat of anger and rage and worse, the shock of what she’d almost done. The way he’d looked at her with disgust. She’d never felt so small. So…lost.

She cursed herself for letting her imagination run amok into the past. Today was about the future. And she realised she was mooning around the grounds still dressed in worn jeans, an even more worn shirt and scuffed sneakers. With her hair pulled back messily, she didn’t look remotely like the owner of a crumbling castillo. If she could still be called an owner when the bank really owned it all.

It was a sorry state of affairs for the last person in a line descended from her mother’s illustrious family. She knew she was the last, because she never intended on having children.
Not after what she’d experienced. The thought of having a child sent a sense of terror through her. At the thought that she could subject them to what she’d been subjected to. Even with the best will in the world.

Enough. She had to get ready. She turned around to leave the garden and came to an abrupt halt when she saw someone standing in the gateway. Someone very tall and broad. Masculine. The sun was in her eyes though and she couldn’t make out his features.

This had to be the potential buyer…but how had he found this garden? The grounds were labyrinthine even to her and she’d lived here her whole life.

For some reason she felt a shiver of recognition. She put a hand up to try and block the sun. ‘Hello, can I help you?’

The man stepped forward and she realised he was even taller than she’d first thought. Well over six foot. And then she saw his face and her blood stopped coursing through her veins.

The man took off his sunglasses, revealing all too familiar deep – set eyes, an unusual colour of green and blue. Aquamarine. They’d always reminded Eva of the sea.

When he spoke his voice was deep. ‘Hello, Eva. We meet again.’

The Kiss She Claimed From The Greek