When one night with a stranger turns to more…

Orla Kennedy doesn’t take risks. But, on the eve of a business deal, nerves lead her to share a drink with a handsome stranger, which results in a night of passion she’ll never forget. Then Orla discovers that the man in question is Antonio Chatsfield — her biggest rival!

Antonio might be a war hero to his family, but his life feels as empty as his recently vacated bed. He never wanted to return to The Chatsfield, London, but his sister needs his help. And he’s more than willing, until he meets the woman who came apart in his bed just hours before! Now Antonio’s sights are set on a merger of a different kind…

Welcome to The Chatsfield, London!

A 4 1/2 Star Review of RIVAL’S CHALLENGE
Orla Kennedy couldn’t have known that the best sex of her life would be with the enemy, but in the light of day her mysterious seducer is the same Chatsfield who wants her hotels. Antonio Chatsfield relies on his iron control in the boardroom, but the enigmatic, adversarial redhead across the conference table made him lose control the night before. Now this wounded warrior must have her and her hotels. Green’s lust-at-first-sight to love story is sensational. her charming, broken hero and determined heroine rule every page with their palpable sexual tension, lively repartee and viscerally carnal love scenes. 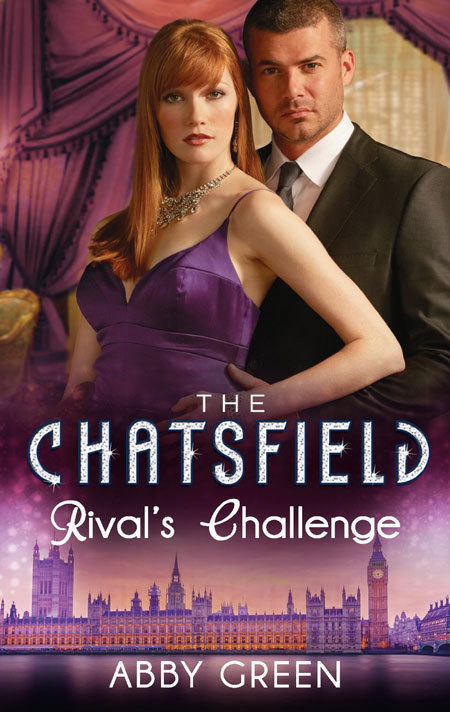 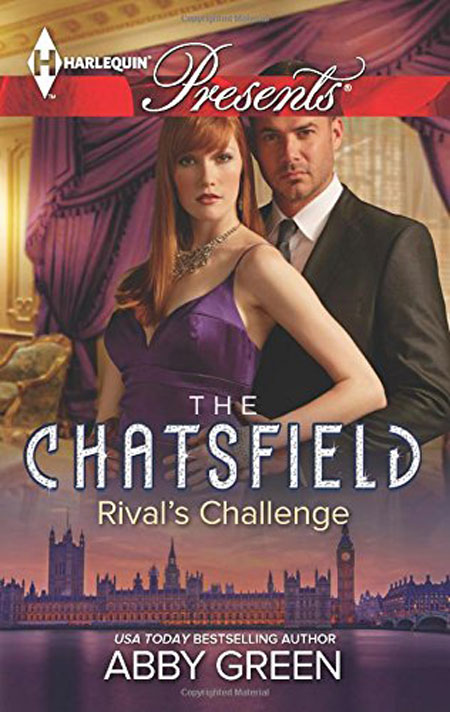 Exactly four hours later Orla sat tapping her pen impatiently on the thick blotting paper pad that sat in front of her on the table. Her legs were crossed under the thick varnished oak table in the modest – sized conference room and her leg jigged back and forth nervously. Even though the room was modest – sized, there any comparison to a normal hotel room ended. It exuded plush luxury. Everything one might require for a meeting was there, but discreetly tucked away so nothing jarred. Orla’s nose wrinkled. She’d noticed a scent in the air when she’d checked in yesterday but then had forgotten about it when she’d been so effectively distracted.

But now she noticed it again and suspected waspishly that the Chatsfield Hotels must pump their signature scent throughout their premises, thereby increasing the whole Chatsfield experience. It was a smart strategy. Smell was well known to be one of the more powerfully evocative senses, and so by having a scent that linked people’s sense memories indelibly to you was prime subliminal advertising. She’d looked into it for their own hotels but it would have been too expensive.

The Kennedy Hotel Group solicitor looked at his watch again and his counterpart across the table said smoothly, ‘I’m assured that Mr Chatsfield is on his way and as I’ve said, he regrets keeping you waiting.’

Orla huffed, she just bet he did. No doubt this was part of the strategy to let them know how weak they were and who was the power player here. It didn’t help of course that she felt woefully under – prepared considering her very out of character sexual adventures last night with a complete stranger who could very well be some kind of underground criminal or a mercenary.

When she thought of all those scars and markings on his body though, she didn’t feel scared so much though as…hot.

She imagined her wanton behaviour must be tattoed on her face like a beacon for all to see but she hoped that the effort she’d put into hiding the ravages of the night before had worked. She’d asked her assistant to buy her some shoes on her way over that morning, claiming some feeble excuse that the ones she’d brought wouldn’t go with the dark navy trouser suit she wore.

So now she had brand new shoes biting into her feet on top of everything else. She put down the pen and fiddled nervously with her white shirt and hoped that the frill detail down the centre where the buttons were didn’t appear too frivolous. She’d been more frivolous in the past twelve hours than in her entire life. And she was not frivolous. Her mother was frivolous. Flighty. Selfish. Orla was hard – working, serious. Frugal.

She’d pulled her hair back into a sleek pony – tail and her heavy fringe offered the faint illusion that she could hide behind it.

Just then they heard voices out in the corridor and all the tiny hairs all over Orla’s body seemed to stand up on end for no apparent reason. The door opened slightly and a huge dark shape loomed just out of sight.

Then the door opened fully and a man walked in with another man in tow. A cold seeping horror spread through Orla’s body. Shock knocked the breath out of her chest. She couldn’t believe her eyes. He was striding in now, clad in a pristine three – piece dark suit that hugged his huge muscular frame. His jaw was clean – shaven. He was stupendously gorgeous. Arresting. Sexual charisma was a tangible aura around him.

Orla was dimly aware that her own assistant had straightened in the chair beside her. The unconscious action of a woman in the presence of a virile alpha – male. In spite of being in her middle – aged years with a healthy brood of children and a loving husband.

Orla felt a surge of something that made her want to turn to her assistant, one of her best friends, and snarl at her.

And then the man’s eyes fell on the people waiting for him. And one in particular. Her. He stopped in his tracks on the other side of the table. That dark compelling gaze on hers. She saw the shock in their depths before it was quickly veiled.

Her lungs burned because she hadn’t drawn a breath. A million things seemed to lodge in her throat and in her belly: Mortification, embarrassment, anger. Shock. Desire.

Orla was dimly aware of the people either side of them both standing to reach across the table to shake each other’s hands. She was paralysed. Her mystery lover was Antonio Marco Chatsfield. The eldest son of the notorious Chatsfield family. She had read up on him prior to this meeting. Ironically he was almost the only one of whom there were no recent photos as he’d been in the army and then the secretive world of private security for years.

If he’d joined the regular army Orla might have seen pictures. But he hadn’t. He’d joined the famed and mythic French Foreign Legion and had served with them for seven years. It was where one entered and assumed another identity. Highly secretive and closed to the outside world. Effectively Antonio Chatsfield had been a ghost until his recent return to the family fold.

But he was no ghost. He was very solid and very real and he was looking at her now and waiting for her to do something. Orla’s brain felt sluggish. Sluggish with shock.

Her assistant Susan discreetly nudged her with her foot, under the table. That physical contact seemed to jolt Orla out of her fog and she stood up and put out her hand, her training and innate manners dictating the automatic moves of social training.

After shaking hands with his assistant, her hand was clasped in his much bigger one – tightly, and the fire of his touch seemed to explode the memory box open in Orla’s brain and body. She was barely able to hold back the onslaught of a thousand lurid images: writhing underneath him, sobbing, panting, gasping. Clenching her legs tighter around his hips, begging him to go deeper, harder.

‘Miss Kennedy,’ he said in that deep voice. His eyes had darkened to black and Orla imagined she could see veritable sparks shooting her way. Something in her hardened as she pushed down those images to a deep place of personal shame. She gripped his hand back just as tightly.

He didn’t let her go. He drawled, ‘It’s funny but I could have sworn we’ve met somewhere before.’

Hot mortification threatened to swamp Orla but she refused to let it rise. If her eyes could have killed, he’d have been vaporised on the spot. She gritted out, ‘Believe me Mr Chatsfield, we’ve never met. I think I would have recalled it, as your family are so memorable.’

Antonio Chatsfield’s eyes flashed at that none too subtle barb and his hand was so tight on hers now that Orla could feel her bones grind together. She bit back the need to cry out. And then abruptly he released her. Orla wanted to cradle her hand to her chest but didn’t, not wanting to show him a moment of vulnerability.

There were two of them who’d conspired to pretend to be someone else last night. He had no right to lambast her silently for it, or allude to it in front of these people.

He said with a deceptive lightness which surely had to be meant only for her ears, ‘I must have been mistaken then, because the woman I’m thinking of is called Kate.’

Orla’s face paled even more when she saw the curious look of her assistant from out of the corner of her eye as she sat back down. Her second name was Kate. They’d both used their second names. It wasn’t even funny.

The Soldier in Room 286
Scroll to top