You are here: Home1 / book2 / Confessions of a Pregnant Cinderella

…will change his life!

“I’m pregnant. With your child.” Kind-hearted waitress Skye has imagined this moment; her chance to finally tell imposing Spanish billionaire, Lazaro that their unexpected and intensely passionate night together had consequences. Yet, confronting him with the truth at an exclusive party, their still-sizzling connection hits her again like a thunderbolt. And what Lazaro says to her next is even more shocking… 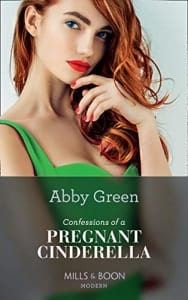 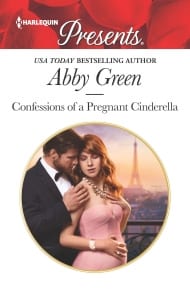 Confessions Of A Pregnant Cinderella

Skye O’Hara was feeling sick. Literally.And she also felt sick with nerves. Not a good combination. A cold clammy sweat lay over her skin, and it had only got worse since she’d slipped into the jaw – droppingly beautiful ballroom with its gold – pannelled walls and massive crystal chandeliers.

She’d never seen so many beautiful, tall, people in her life. Or such finery. Glittering sheaths of dresses. Tuxedoes. Acres of smooth honey – hued skin, making her feel even more pale and wan. Golden lights everywhere. It even smelled exclusive. The kind of scent that couldn’t be bottled. It was wealth.

She’d dressed in a white shirt and black skirt to try and fade in with the staff. Put her unruly hair up in a tidy bun on her head. No way would she have had the wherewithal to even remotely attempt to be one of these people. For a start she was about a foot too small and the only redhead in sight. And she had freckles. A phsyical imperfection people like this would eliminate on sight, no doubt.

She craned her head, coming up on tip – toe to try and see further into the room. To see where he was. Her hand went to her belly where the reason for much of her nausea resided.

And then she saw him in the distance. How could she not? Even he stood head and shoulders above these giants. His dark blond hair was still just the right side of too long and messy. Stubble emphasised the hard line of his jaw. And his mouth…she couldn’t see it from here but she could remember it. Sculpted and firm. Hot.She remembered how it had felt on her bare skin…closing over her – a gap formed in the crowd and now she could see all of him.

He was wearing a white tuxedo jacket with a white bow – tie. Black trousers. He stood out effortlessly, a little bit different from everyone else. As if he couldn’t contain some elemental part of himself even in this civilised milieu.

Elemental.That’s what it had been like that night. Wild. Elemental. Unbelievable. Unforgettable. Skye’s hand tightened on her belly. Unforgettable in more ways than one.

A woman came up to her with a stern look on her face. Staff, not a guest, in a black uniform dress. Just as Skye was about to panic that she’d been caught out the woman handed her a tray full of glasses of champagne and told her to stop wasting time. Relief flooded Skye. Her disguise had worked.

She took a deep breath and started to move closer through the crowd to where hestood. Lazaro Sanchez. She’d looked him up on the internet the day after their night together – and nearly had a heart attack when she’d realised that he was a seriously wealthy and influential financier with an extensive real – estate portfolio. A household name in his native Spain.

And also, that he was a renowned playboy. There had been acres of photos of him with a veritable stream of beautiful women. It had stung more than a little to know that she’d been naive enough to fall for his smooth charm. That what had happened between them must have merely been a blip in his normal routine. A forgettable night among many. And it had stung even more that she hadn’t resembled any of his usual women, so evidently he’d only slept with her because she’d been a bit…different.

And now…now he was about to announce his engagement to the most beautiful woman in the world. Skye could see her standing beside Lazaro, his arm around her waist.

They looked good together. Both tall. Lean. Her dark hair was sleek and pulled back and she wore a red strapless dress. A slim classic column that clung to every perfectly proportioned curve and oozed sophistication and elegance.

For a second Skye faltered. She put the tray down on a nearby table for fear of dropping it. Should she have come here to do this? She lamented again that she hadn’t been able to get to Lazaro before this event but it would have been easier to get a message to the Pope. She’d been blocked and shut out at every turn.

What right did she have to interrupt this momentous moment? The announcement of his engagement to this glamazon?

Because you’re pregnant with his baby and he needs to know, reminded a cool voice in her head.

Just then there was a sound of someone tapping on glass that cut through the buzz of chat in the room. Everyone fell silent and turned to where Lazaro and his fianceé were standing on a raised dais. Skye felt even more sick now. Had he been with her when they’d slept together three months ago? Had he known he would be getting engaged?

She saw the cordon of security men near the couple. Fearsome looking individuals. Skye could see how it would happen – they’d announce their news and suddenly they’d be thronged and then whisked off to some secret location. This was her only chance to get his attention. She had to take it. She couldn’t have it on her conscience that he didn’t know she was pregnant. That their one – amazing – night together had had repercussions.

And, his fiancée deserved to know the kind of man she was marrying, if they had been together while he’d been seducing Skye in another city.

Awakened By The Scarred Italian

Redeemed By His Stolen Bride
Scroll to top