USA Today bestselling author Abby Green takes you on one Queen’s sensational journey from a masquerade ball to a royal scandal in this fantastic digital exclusive!

Desperate for a last taste of freedom before she enters a political, loveless marriage, Analia—the famous Virgin Queen of Azoria—hides behind her mask at a glitzy Venetian ball. Until the stormy grey gaze of an enigmatic, disguised stranger lays her soul—and her body—bare in one passionate night!

World-famous photojournalist Daniel Petrovsky learned years ago to harden his heart against emotions and the morning disappearance of his anonymous lover should mean nothing. But when a certain queen’s shock pregnancy hits the headlines, the brooding billionaire will stop at nothing to fight for what is his! 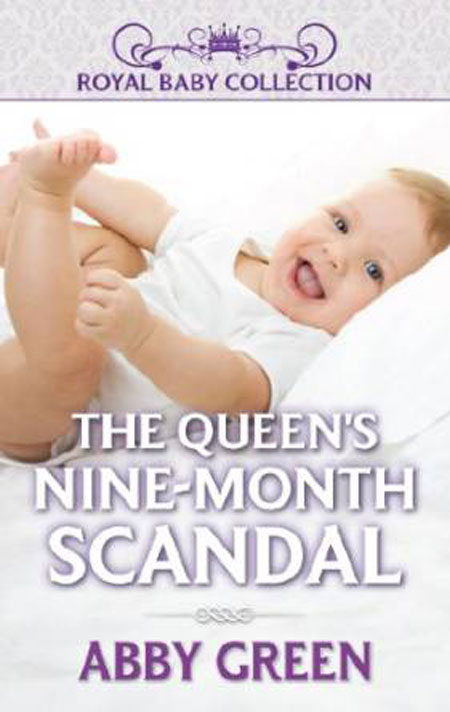 Analia was still giddy with the knowledge that she’d managed to escape the confines of her hotel suite thanks to observing a maid use a staff entrance earlier in the day. For the first time in her life she wasn’t surrounded by staff and bodyguards in public. The feeling of freedom was heady. Waiters were passing through the crowd dressed in costume, their faces covered by masks. The guests looked beautiful and mysterious. Everyone was anonymous here. She could be anyone.

It took a second for the deep voice at Analia’s side to register and she turned with a start to see a glass of champagne being held out towards her. She looked up, and up again to see a broad shouldered man who quite simply took her breath away. His face was almost entirely obscured on top by a black mask, and on the bottom by the dark growth of a beard that hugged his jaw.

Unlike the other men dressed in tuxedos, he was in a dark suit but with an open – necked shirt. Unruly wavy dark hair almost touched his collar and only added to his rakish appearance, the hint of rebelliousness..it resonated deep within her.

His lips quirked and they were firmly sculpted and so unedniably sensual that she felt a flutter of something hot deep in her belly. And then he smiled, flashing strong white teeth and Analia was dazzled. She also felt very strangely as if he was familiar to her, but in a way she couldn’t rationalise. A little shiver went down her spine.

She took the glass and murmured, ‘Thank you.’

‘I take it you’re not meeting anyone here?’

Analia took a gulp of the sparkling liquid and let the bubbles race down her throat before saying wryly, ‘Is it that obvious?’

The man shrugged minutely, ‘You looked a little lost when you came in.’

Something pierced her at lost and she asked him in turn, ‘And you? Are you alone too?’

He turned his face to cast a look over the crowd and Analia’s belly tightened to see how strong his jaw was. He was so intensely masculine.

‘I know our host, that’s about it.’ He turned to look back down at her, ‘With all these masks it’s hard to know about anyone else.’

He seemed to know exactly what she meant and said slowly, ‘Me too…so no names then, or that’ll ruin it.’

Flutters increased in Analia’s belly. It was as if she’d agreed to enter into some kind of illicit pact with this man. Which was crazy. They’d only just met. Nevertheless she heard herself saying, ‘No names.’

Quirking a sexy smile again he said, ‘We could make up names?’

Analia felt a giggle rising up, an incredible lightheartedness. ‘That’s a girl’s name!’

He drawled, ‘I think it’s fairly obvious I’m not a girl. I’ll have you know that it’s a very respectable man’s name in Russia where my ancestors come from. Or not…I could be making it all up.’

Analia had a sense that he wasn’t making it up. Something about him made her think of vast open steppes and an inhospitable environment pitting man against nature. Very aware of her heart pounding, Analia put her hand in his and seized on the first name she could think of. I’m…Alexandra.’

Instantly the air around them seemed to crackle with awareness. Analia was aware of her hand being dwarfed by his. The faint calluses against her delicate skin. His incredible heat.

Seconds passed, stretching as they stood there, locked in this bubble of intimacy. She felt his thumb move ever so slightly against the pulse of her wrist and her eyes widened under the lace of her mask, her breath choppy.

The lighthearted feel of the last few moments seemed to change to something more intense. Analia could feel blood rushing to her face and other parts of her body. Her breasts felt heavy and her nipples became hard points against the silk of her dress.

Without releasing her hand or saying anything else, Sasha guided her over to where doors stood open, leading her out to a balcony which overlooked the canal. Analia felt a little dazed. She’d only met this man mere minutes ago and yet she felt bizarrely as if she’d been speaking to him for hours.

A couple passed them on their way back into the room and then they were alone on the balcony, the sound of the party muted. He let her hand go and Analia felt ridiculously bereft. She clutched her glass and said innocuously, ‘It’s so incredibly beautiful here.’

She looked up at Sasha but he was looking at her, not the view. Under his mask she could make out the dark intensity of his eyes and that they were grey, like a stormy Atlantic.

‘What are you doing here?’ he asked then.

Emboldened by the prosecco, the headiness of the protection of anonymity, Analia whispered, ‘Escaping.’

She could imagine him quirking a brow under his mark and he asked inevitably, ‘From what?’

Analia looked away and gulped. Everything was slightly obscured from under the black lace of her mask. ‘From nothing…and everything.’

She looked at him and lifted her chin. ‘And you? Why are you here?’

He smiled. ‘Because I was looking for you.’

The words were only meant as a light flirtation. A platitude. The equivalent of asking her if she came here often? But Analia couldn’t stop herself from imbuing them with a significance they didn’t warrant.

His smile faded then and he put down his glass of wine onto a nearby table. Analia tensed. He stretched out a hand and ran his finger down one cheek and across the line of her jaw.

Analia’s skin tingled deliciously where he touched her. She blushed. No – one had ever complimented her like that before, it wouldn’t be appropriate. She answered huskily. ‘Thank you.’

As if unable to help himself, he moved closer and his hand snaked around to the back of Analia’s neck, under her hair. She felt unbearably sensitised and languorous all at once. Unable to stop him. Not wanting to stop him. Not even when he pulled her close enough so that she could feel the latent strength of his body next to hers.

His head dipped and her eyes fluttered closed as that wickedly sensuous mouth settled over hers. Tasting, touching, so delicately that she might have imagined it. And yet, it burned like a brand.

Forgiven But Not Forgotten ?