The Virgin’s Debt To Pay

Indebted to the billionaire…And he will collect!

Nessa must appeal to notorious tycoon Luc’s better nature to exonerate her brother of theft. But Luc is the most merciless―and sinfully attractive―man Nessa’s ever met! Until the debt is settled, he’ll hold her as his captive. And when undeniable attraction overwhelms them both, it becomes clear that Nessa’s innocence is the real price to pay…! 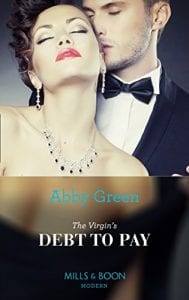 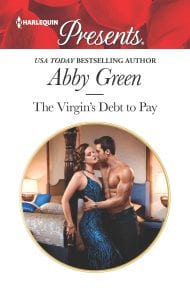 The Virgin’s Debt To Pay

What on earth did she have to laugh about? Luc was distinctly irritated by the faint lyrical sound emanating from his stable – yard. It could only be coming from one person, the newest addition to his staff. Nessa O’Sullivan.

His Irish stud bustled with an air of activity which usually managed to maintain a level of tranquility that was required when handling some of the world’s most valuable thoroughbreds.

Her brother had stolen from him and now she laughed. It sent the very insidious thought into Luc’s head that he’d been a total fool. Of course she was in on it with her brother and now she was inside the camp. It made him think of the Horse of Troy and he didn’t find it amusing.

He cursed and threw down his pen and stood up from his desk, stalking over to the window that looked down over the stables. He couldn’t see her and that irritated him even more when he’d deliberately avoided meeting her since her arrival. Not wanting to give her the idea that their extended dialogue when he’d found her trespassing the other night would ever be repeated. He was distracted now. When he couldn’t afford to be distracted.

He’d only just managed to convince Gio Corretti that the slight delay in money arriving to his account was due to a banking glitch.

Luc’s reputation amongst the exclusive thoroughbred racing fraternity had been on trial since he’d exploded onto the scene with a rogue three year old who had raced to glory in four consecutive Group One races.

Success didn’t mean respect though. He was an anomaly; he had no lineage to speak of and he’d had the temerity to invest wisely with his winnings and make himself a fortune in the process.

Everyone believed his horses were better bred than him, and they weren’t far wrong. The rumours about his background merely added colour to every other misconception and untruth heaped against his name.

But, as much as he loved ruffling the elite’s feathers by making no apology for who he was, he did want their respect. He wanted them to respect him for what he had achieved with nothing but an innate talent, hard work and determination.

The last thing he needed was for more rumours to get around – that Luc Barbier couldn’t control his own staff. That he’d been stupid enough to let one million euros flow out of his account.

Even now he still felt the burn of recrimination for finding Paddy O’Sullivan’s open expression and infectious enthusiasm somehow quaint. He should have spotted a thief a mile away. After all he’d grown up with them.

Luc tensed when he heard the faint sound of laughing again. Adrenalin mixed with something far more ambiguous and hotter flooded his veins. Nessa O’Sullivan was here under sufferance for her brother – and that was all. The sooner she remembered her place and what was at stake, the better.