You are here: Home1 / book2 / The Flaw in his Red-Hot Revenge

He can’t forgive her…or resist her

Zachary hasn’t forgotten Ashling’s unparalleled beauty—or the way she almost ruined his career ambitions! But when chance brings her back into his world, Zach discovers he wants something far more pleasurable than payback… 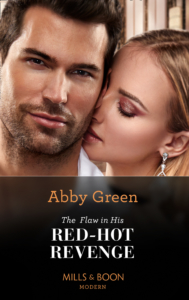 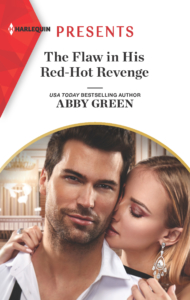 Ashling Doyle was so nervous she was taking short panting breaths and it was making her lightheaded. She had to force herself to take deeper breaths. She just hadn’t expected this place to be so…intimidating.

She was tucked behind a large plant, hidden from view, in one of London’s most iconic and historic hotels, which was hosting one of the city’s most exclusive events in the annual social calendar.

Even the air smelled expensive and she’d only realised a short while before that it was scented, which only added to the very rareified atmosphere and gobsmacking luxury of the place.

She touched her hair again nervously, even though the wig felt secure. She wasn’t used to long hair tumbling over her shoulders in sleek waves. Or, the vibrant red colour that gave her a jolt of shock whenever she caught a glimpse of her reflection.

She shivered slightly when someone opened a door nearby and the frigid winter air touched her exposed skin. Of which there was a lot. She looked down at the tight black strapless dress and tried to tug it ineffectually up higher over her breasts. It sat an uncomfortable few inches above her knees. And it sparkled when she moved from the crystal embellishment in the material. Discreet, it was not.

She spoke to the man in the suit beside her, Carter. She’d only met him this evening to be given the spec for the job. He would supervise her. ‘Every other woman is wearing a long evening dress, won’t I stick out?’

As if she needed reminding that she didn’t belong in a place like this, and would never, in normal circumstances, be mixing with this rareified crowd. But then, this was not a normal circumstance. She was only here as a massive favour for a friend from her amateur dramatics group, who couldn’t make it.

She looked back out to the crowd, through a gap in the foliage. ‘That’s him? The man in the middle? With the dark brown hair?’

In a classic black tuxedo he shouldn’t be standing out from hundreds of other men similarly dressed but he did. And not just because he was taller and broader than everyone else. It was something the eye couldn’t see, but which Ashling could sense even from this distance. Power. Charisma. Sexual magnetism.

‘Yes, that’s him. He’s talking to a blonde woman.’ A prickle of foreboding went up Ashling’s spine. There had been no mention of a woman.

Carter took her arm and thrust her out from behind the plant and towards the crowd. ‘This is the moment, do it now.’

Ashling hesitated and he said from behind her. ‘If you don’t go now, the moment will be gone and you won’t get paid.’

Ashling’s belly lurched. She needed the money to finish her yoga teacher training course or she’d never establish herself. She took a deep breath to quell her nerves and threaded her way through the crowd until she was right behind the man.

He seemed even taller up close, at least a foot over her very average five foot five. And she was wearing heels. His back looked impossibly broad and imposing. His suit was lovingly molded to his powerful body as only a bespoke suit could be.

Ashling had no idea who this man was, only that he was the one she had to target. With the script she’d been given. An elaborate practical joke she’d been told. She’d put it down to the crazy whims of rich people who did strange things because they could. Because they were bored.

She wasn’t going to get anywhere looking at his back so she stepped around him and stood right in front of him. And promptly lost the ability to breathe and form a coherent thought.

He’d been smiling at the tall blonde woman by his side, but now the smile faded when he looked at Ashling. His eyes dropped, taking in the dress which Ashling realised had been picked for exactly this effect.

Even though it came from a designer label, she stuck out like a tacky bauble amongst clear bright gems. The woman beside him was wearing a white dress, cut with the kind of elegance that could only be manufactured by hand in an atelier in Paris. Ashling registered this without even looking at the woman.

Just stick to the script and then leave. The words of instruction came back to her. She came out of her trance and the nerves started to bubble upwards.

Emptying her mind of everything but the role she was playing, Ashling launched herself at the man, wrapping her arms around his neck. ‘There you are darling, I’ve been looking everywhere for you.’

Bound By Her Shocking Secret
Scroll to top